Bennett set to take on dual roles in 2022 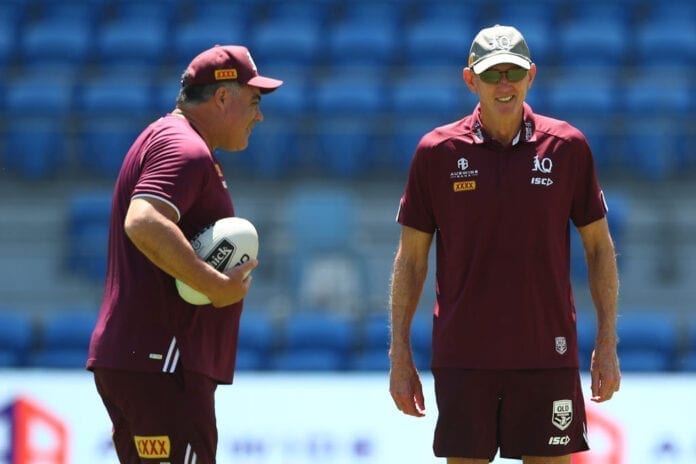 Recently departed South Sydney Rabbitohs’ coach and new Dolphins boss Wayne Bennett is on the verge of agreeing to a State of Origin support role for 2022.

While he needs the permission of the Dolphins to take the job as he works on building their squad for an inaugural 2023 season, the Queensland Rugby League have not hidden the fact they want Bennett involved with the Origin camp.

It came as part of a plan which also involved having another former coach in Mal Meninga involved.

While the Australian Rugby League Commission shut down that part of the idea due to Meninga’s role as the Australian Kangaroos coach and 2022 being a Rugby League World Cup year, the idea to have Bennett work with incoming Origin coach Billy Slater is still on the table.

Slater is taking over the reigns of the team from the outgoing Paul Green, who oversaw a disastrous 2021 campaign and now wants to chase a return to club land.

Slater has never coached at a professional level and the former Maroons champion is attempting to build a strong team of assistants around him, including potentially former Origin captain Cameron Smith and champion half Johnathan Thurston.

Bennett won’t be used as an assistant, but rather a consultant within the camp for Slater, and according to a News Corp report, The Dolphins have now given permission for the 71-year-old mentor to be involved with the Maroons in 2022. BRISBANE, AUSTRALIA – JULY 11: Billy Slater of Queensland waves to the crowd as he is chaired from the field by Cameron Munster and Will Chambers of Queensland after his final game for Queensland during game three of the State of Origin series between the Queensland Maroons and the New South Wales Blues at Suncorp Stadium on July 11, 2018 in Brisbane, Australia. (Photo by Mark Kolbe/Getty Images)

Bennett has spent plenty of time in charge of the Maroons previously, most famously guiding the state to an underdog victory in 2020 over the far more fancied Blues.

QRL chairman Bruce Hatcher confirmed to the publication that they would chat to Bennett this week.

“I’ve got a pretty strong relationship with Wayne and we have very regular dialogue,” Hatcher said.

“When you’ve finished a season and had a tough season like Souths had, going within a sniff of winning a premiership, they deserve a bit of a break.

“I’ve said to him when he’s ready to have a chat, give us a yell. We are having a chat this week.”

Slater’s employment at the QRL is seen as a full-time role, with the Maroons wanting to follow the Blues approach which has seen Brad Fittler turn into a full-time member of development staff and part-time Origin coach.