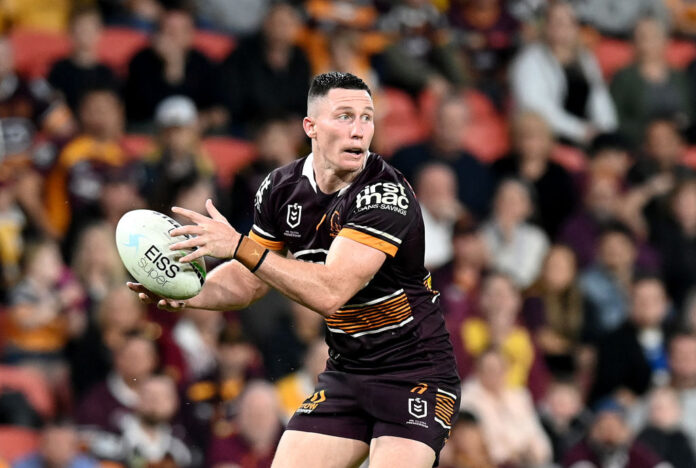 BRISBANE, AUSTRALIA – APRIL 30: Tyson Gamble of the Broncos looks to pass during the round 8 NRL match between the Brisbane Broncos and the Gold Coast Titans at Suncorp Stadium, on April 30, 2021, in Brisbane, Australia. (Photo by Bradley Kanaris/Getty Images)

Brisbane Broncos half Tyson Gamble has requested a release from the club with prospects of minutes continuing to dwindle.

Gamble’s own spot in the team would be brought crashing to the ground though by an injury of his own, with Ezra Mam picked as his replacement.

The form of Mam, who shone when he debuted against the Knights, has since gone to another level, and the combination with Reynolds has kept Gamble out of the side, although he played a pair of games off the bench in Round 17 and 18 against the St George Illawarra Dragons and Gold Coast Titans respectively.

Gamble has since been out of the side since those two games and according to News Corp, has now requested a release.

The publication understands that the Newcastle Knights, who are in the midst of a horrendous season, are looking closely at the situation and may offer Gamble a lifeline.

The Knights will lose Anthony Milford to the Dolphins for the 2023 season, while reports have also speculated that the out-of-favour Jake Clifford could request a release from the Hunter.

That would only leave Adam Clune, Phoenix Crossland (currently unsigned) and Simi Sasagi as the likely options in the halves, meaning the Knights would be desperate to bolster their stocks at six and seven.

Gamble has shown some impressive form during his 24 matches and could be a good fit for the Knights, with Broncos’ director of football Ben Ikin confirming to the publication that Gamble has been given permission to negotiate his exit from Red Hill.

“Tyson has been given permission to negotiate,” Ikin said.

“We understood how Tyson felt, he wants to make the most of his career and we decided to give him that opportunity.

“After providing great value for us, he found himself in a tough situation stuck behind Ezra Mam and he was keen to find a first grade spot somewhere else.

“I don’t know where Tyson will end up, but he has permission for us to look around.”