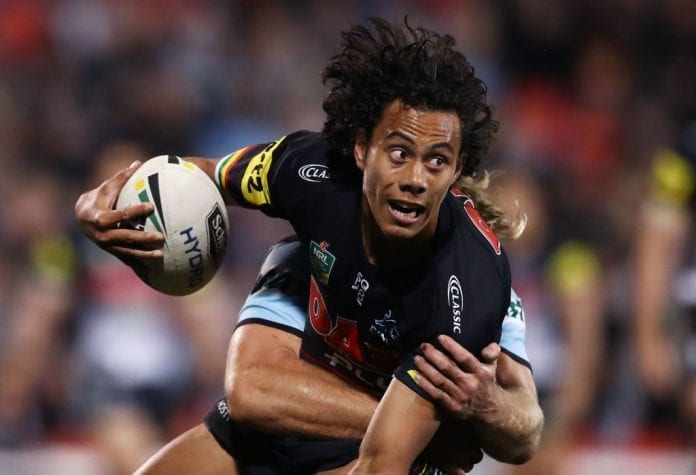 PENRITH, AUSTRALIA – JULY 13: Jarome Luai of the Panthers is tackled during the round 18 NRL match between the Panthers and the Sharks at Panthers Stadium on July 13, 2018 in Penrith, Australia. (Photo by Matt King/Getty Images)

They’re close friends who’ve played side by side for years, but Penrith Panthers five-eighth Jarome Luai has revealed that a strong personal bond doesn’t mean he’s exempt from copping a spray from halfback Nathan Cleary in the heat of battle.

The spray in question, which came after a Luai error helped Newcastle score a late try in the final 10 minutes of a contest the Panthers were leading 42-0, also highlighted the impeccable standards and pursuit of excellence driving the Panthers to their third consecutive grand final appearance.

“I remember there was a loose ball and I went to dive on it. I physically felt I couldn’t get to it but (Cleary) reckons I could,” Luai recalled to the Daily Telegraph.

“I could see him in the corner of my eye, then I heard him.

“He was just yelling my name out – I mean really yelling – but I kept walking away.

“But I knew he was calling me, and I know that he knew that I knew… There were a couple of swear words in there, we laugh about it now.” 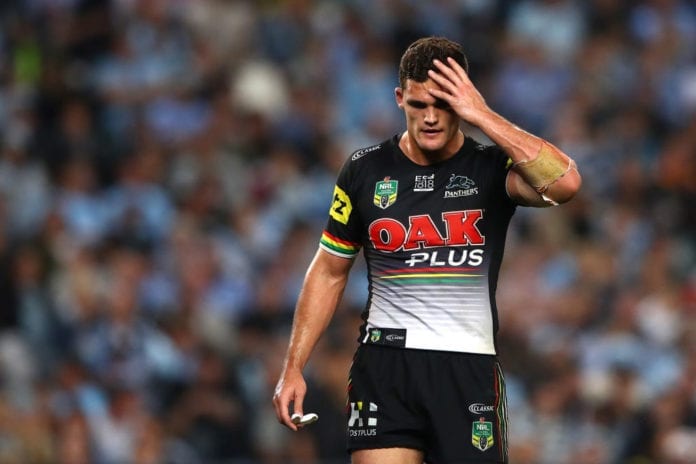 SYDNEY, AUSTRALIA – SEPTEMBER 14: Nathan Cleary of the Panthers looks dejected during the NRL Semi Final match between the Cronulla Sharks and the Penrith Panthers at Allianz Stadium on September 14, 2018 in Sydney, Australia. (Photo by Cameron Spencer/Getty Images)

Having played together for many years beyond their combination at NRL level, Luai says the close relationship ensures he doesn’t take these moments too personally.

“He’s probably the only one I can cop a spray off,” Luai admitted.

“If I do something wrong, he’s the first guy to spray me. It’s good, we need that in our team. We keep each other accountable, that’s what a good team does.”

The contrasting duo have grown better with time, but while Luai is known as a bit of a wildcard foil to his calm and composed halfback, the fact he’s finished second in the league for penalties shows he still occasionally needs to be brought back down to earth.

“I feel like because I’ve played with him for so long I feel comfortable spraying him or telling him when he’s done something wrong,” Cleary told the Telegraph.

“He takes it well. He got that bad one in Newcastle but it doesn’t happen too often.”

Despite Cleary’s occasional reminders, Luai is already very conscious of the things he needs to improve ahead of Sunday’s historic grand final.

“(The penalties) are something I have to keep a lid on because it hurts the team,” the five-eighth said.

“I don’t look for that stuff because it puts our team in a bad position.