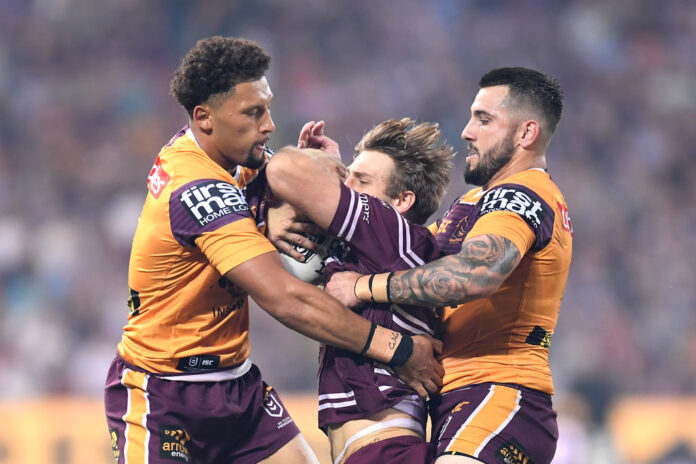 BRISBANE, AUSTRALIA – MAY 10: Brendan Elliott of the Sea Eagles is tackled during the round nine NRL match between the Manly Sea Eagles and the Brisbane Broncos at Suncorp Stadium on May 10, 2019 in Brisbane, Australia. (Photo by Albert Perez/Getty Images)

The North Queensland Cowboys have landed the signature of Brendan Elliott for the 2022 season.

Something of a journeyman, Elliott managed 66 NRL games between 2014 and 2020 across stints with the Sydney Roosters, Newcastle Knights, Gold Coast Titans and Manly Sea Eagles before making the shift to the English Super League in 2021.

Linking up with the Leigh Centurions, he played 11 games in his single season in the northern hemisphere before returning to Australia.

He has now been officially signed to a one-year deal with the North Queensland Cowboys and will provide considerable depth to the backline given his ability to play wing, centre and fullback.

He has played all three positions in first-grade and Cowboys general manager of football Michael Luck said it was an excellent signing.

“We are thrilled to sign a player of Brendan’s experience and character so late in the pre-season,” Luck said.

“Brendan adds genuine experience, depth and competition to our outside backs, which is valuable in any season, but amplified in 2022 with the uncertainty the COVID-19 pandemic could have on player availability during the year.”

The Cowboys are likely to move Hamiso Tabuai-Fidow to fullback this year, which will see Valentine Holmes land in the centres, while Kyle Feldt will hold his wing spot. Peta Hiku’s arrival claims another position, meaning the final spot in the backline could come down to a battle between Murray Taulagi and Elliott.

Luck will begin training with the Townsville-based outfit this week.