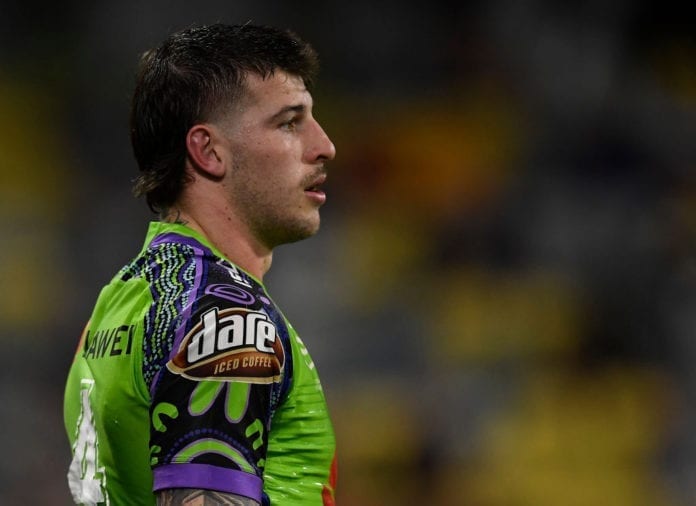 TOWNSVILLE, AUSTRALIA – AUGUST 01: Curtis Scott of the Raiders looks on during the round 12 NRL match between the North Queensland Cowboys and the Canberra Raiders at QCB Stadium on August 01, 2020 in Townsville, Australia. (Photo by Ian Hitchcock/Getty Images)

Former Canberra Raiders and Melbourne Storm centre Curtis Scott is “unlikely” to play any NRL during the 2022 season.

However, before it could commence, Scott was arrested by New South Wales police on accusations alleging he assaulted his ex-partner on several occasions.

Scott was then charged with two counts of intentionally choking a person with recklessness, two counts of assault occasioning actual bodily harm, stalk or intimidate, and three counts of common assault by New South Wales police.

The charges relate to an alleged 2018 incident against his ex-partner.

The clubless centre appeared in court for the first time last week, however, the matter was adjourned until August.

The NRL, in not allowing the Eels to register even a training only contract for the centre, made it clear no contract would be registered until the completion of his court hearing.

That said, an August timeline will mean the NRL is set to go into finals mode just weeks later, all but ending the chances of Scott being handed an NRL spot this season.

The Eels were reportedly keen on acquiring the services of Scott given their shortage of backline options. Both Blake Ferguson and Michael Oldfield left the club in the off-season, and while that has been offset by the signing of Bailey Simonsson from the Canberra Raiders, their depth looks thin.