Cut-price Edwards doubling his worth with incredible form 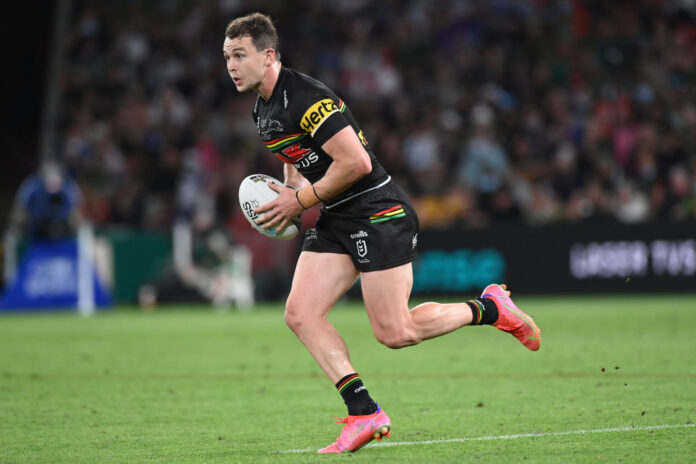 BRISBANE, AUSTRALIA – OCTOBER 03: Dylan Edwards of the Panthers runs the ball during the 2021 NRL Grand Final match between the Penrith Panthers and the South Sydney Rabbitohs at Suncorp Stadium on October 03, 2021, in Brisbane, Australia. (Photo by Bradley Kanaris/Getty Images)

The incredible form of Penrith Panthers fullback Dylan Edwards is likely to cause salary cap headaches for the club after it was revealed that the NRL’s form No.1 is currently earning half as much as the game’s leading custodians.

Edwards is currently earning $500,000 a year at the club – a significant amount less than the likes of Kalyn Ponga, Tom Trbojevic and James Tedesco (all on $1.1m).

Edwards’ current deal keeps him at the Panthers until the end of 2024, which means the club is likely going to have to upgrade his offer before rivals come calling on November 1 next year.

His numbers speak for themselves after a remarkable campaign, leading the league in average metres and total runs.

Captain Isaah Yeo was frank when talking about how important Edwards has been to the Panthers’ hopes of back-to-back titles.

“He’s been our best player by a landslide,” Yeo told the Telegraph.

“He’s been so consistent for us it’s probably taken this year to get recognised from the outside. From the inner circle he’s just been outstanding and a real key to this run over the last few years.

Dummy-half Api Koroisau was just as effusive in his praise when talking to ZeroTackle a few weeks ago.

“His work-rate is unbelievable. I wouldn’t want any other fullback on my team.”

Even Gutherson himself recognises the significance of Edwards’ impact on the defending premiers.

“He’s an outstanding player,” the Eels co-captain told the Telegraph.

“The fact is he’s been doing this for four or five years, it hasn’t been out of the blue.”

“He’s a great player and you have to respect what he does on the field. He runs for 300 metres a week and has 30 carries, he’s doing a lot of work.

“I think he deserves every accolade he gets.”

If the Panthers continue to live at the top end of the table thanks to Edwards’ contributions, it won’t just be accolades being thrown his way this time next year.