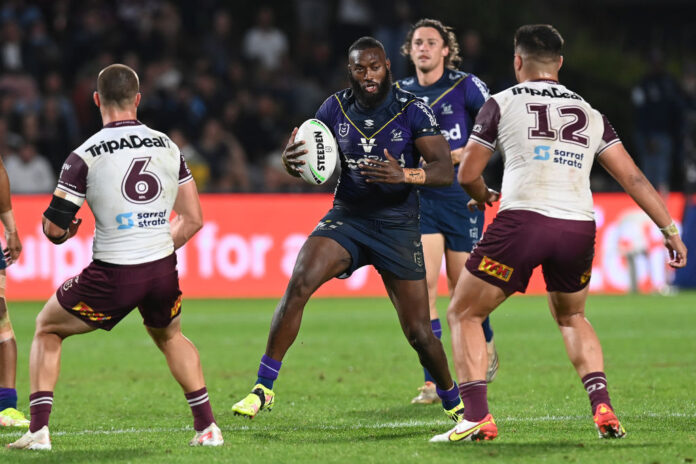 SUNSHINE COAST, AUSTRALIA – SEPTEMBER 10: Isaac Lumelume of the Storm is tackled during the NRL Qualifying Final between the Melbourne Storm and the Manly Warringah Sea Eagles at Sunshine Coast Stadium on September 10, 2021, in Sunshine Coast, Australia. (Photo by Bradley Kanaris/Getty Images)

With very little fanfare, Lumelume quietly announced on his Instagram on Wednesday evening that he was departing the Storm for “family reasons”, indicating that the next chapter was beginning.

It would now appear that next chapter is for Lumelume to join the Bulldogs, who are understood to have had a single roster spot open for the 2022 season.

The towering winger made his Storm and NRL debut in 2020, before the 23-year-old managed a handful of games at the back-end of the 2021 season, making his presence felt with size and speed to burn.

Lumelume has already represented Fiji on two occasions to go with his six NRL matches.

While the Bulldogs are yet to make an official statement, multiple photos emerged on Twitter on Thursday night of Lumelume seemingly training with the remainder of the Canterbury outfit.

Lumelume is a Canterbury junior, having been born in Auburn and playing for the Berala Bears in the Canterbury competition. The former New South Wales under-18s and under-20s representative was snapped up by the Storm in 2019 to join their system and fought with Dean Ieremia at the back-end of 2021 for a spot on the wing.

He is unlikely to be in Canterbury’s first 17 for 2022 following a slew of high-profile signings at the club, however, he will serve as a handy back-up option for Trent Barrett.