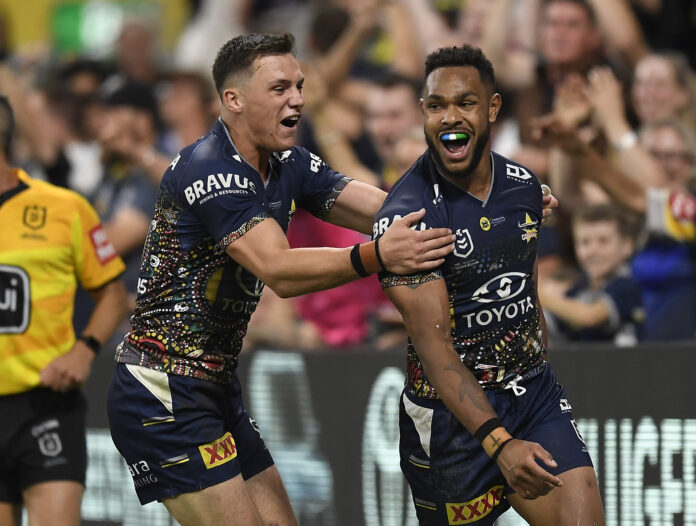 TOWNSVILLE, AUSTRALIA – MAY 28: Hamiso Tabuai-Fidow of the Cowboys celebrates after scoring a try during the round 12 NRL match between the North Queensland Cowboys and the New Zealand Warriors at QCB Stadium, on May 28, 2021, in Townsville, Australia. (Photo by Ian Hitchcock/Getty Images)

The Dolphins have all-but secured the services of North Queensland Cowboys speedster Hamiso Tabuai-Fidow on a three-year deal, as reported by the Daily Telegraph.

With all aspects of the deal complete, the Dolphins are expected to announce the signing as soon as the Cowboys officially release him from the final 12 months of his current contract.

The 21-year-old was told earlier in the season that he was free to look elsewhere for opportunities after falling behind Scott Drinkwater in the race for the Cowboys’ fullback jersey. Though Tabuai-Fidow started the season in the role, an early injury left the door open for Drinkwater to seize his opportunity.

With Drinkwater recently signing a deal that will keep him in Townsville until 2027, Tabuai-Fidow was left with little choice but to move on.

Though he can play any position in the backline, it’s believed he’ll be given the still-vacant No.1 jersey for the Dolphins’ inaugural season and complete a spine that currently consists of 200-game veteran Anthony Milford, current Panthers deputy Sean O’Sullivan and Canterbury Bulldogs 2022 Player of the Year Jeremy Marshall-King.