Doueihi no sure thing to remain a Tiger as rivals circle 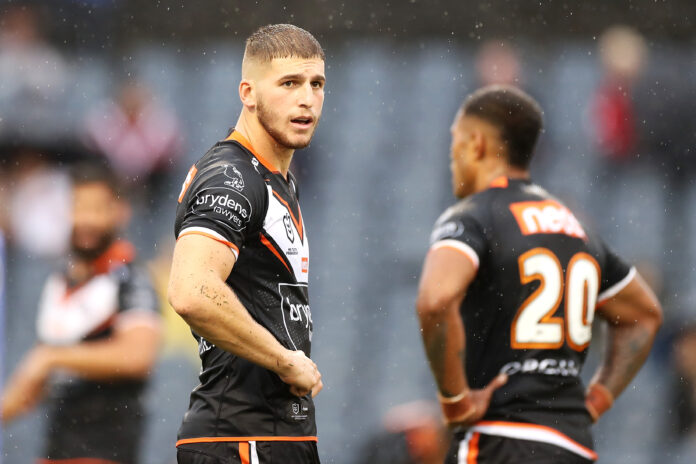 SYDNEY, AUSTRALIA – MARCH 21: Adam Doueihi of the Wests Tigers looks dejected during the round two NRL match between the Wests Tigers and the Sydney Roosters at Campbelltown Sports Stadium, on March 21, 2021, in Sydney, Australia. (Photo by Mark Kolbe/Getty Images)

Wests Tigers star five-eighth Adam Doueihi could be on the move at the end of the 2023 season, with the Melbourne Storm reportedly keeping a close eye on his situation at Concord.

Off-contract at the end of the year, incoming head coach and current director of football Tim Sheens has flagged the need to re-sign the star, alongside others like Jackson Hastings, however, no progress has been made yet on the contract front.

Doueihi, along with well over 100 other players, will become a free agent for the 2024 season from November 1 this year, meaning they have freedom to negotiate in their contract year.

And it’s tipped the suitors could line up for the five-eighth, who has been one of the best at the joint venture consistently since his arrival, despite battling through injuries.

Doueihi only returned from injury halfway through this season, but has played strongly since he rejoined the team, and with an ability to play at five-eighth, centre or fullback, presents obvious value to any team who would chase him.

The Daily Telegraph are reporting that the Storm are continuing to monitor his contract situation, with Doueihi off-contract at the end of 2023 – the same time as Cameron Munster.

The Storm made a play to bring the star to the club on loan for the remainder of this year in the lead up to August 1, before they ultimately landed David Nofoaluma on loan from the Tigers.

Sheens decided he wasn’t going to be letting Doueihi go, however, he may not have a choice if the Storm come to the contract party for 2024 from November 1.

Melbourne are currently working through what a deal would look like with Munster, however, it’s looking more and more likely that the Storm star will, at the very least, hit the free agency market.

His manager Braith Anasta all but admitted that he would hit the free agency market during the week from November 1, with the Dolphins and a number of other clubs believed to have already shown interest.

Should that happen and the Storm fail to retain Munster, then they would have plenty of cash free to chase Doueihi – believed to be in the range of $750,000 per season – which could be enough to convince Doueihi that a move to the Victorian capital is the best move for his career.

Both Munster and Doueihi can officially negotiate with rival clubs from November 1.