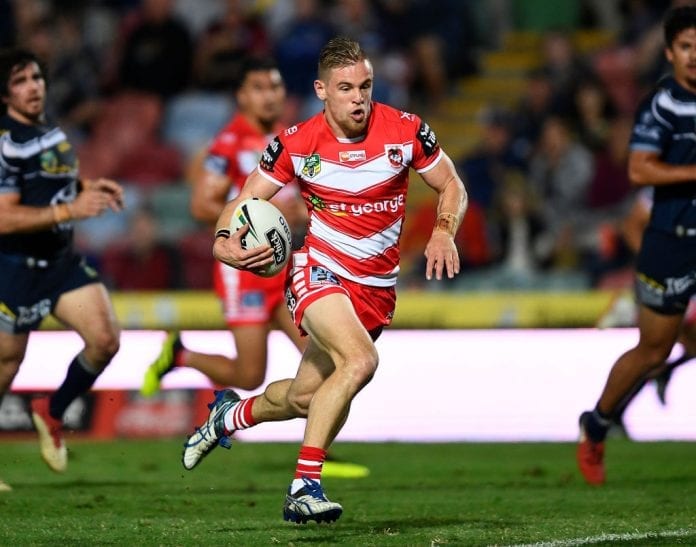 TOWNSVILLE, AUSTRALIA – JULY 21: Matt Dufty of the Dragons makes a break which lead to him scoring a try during the round 19 NRL match between the North Queensland Cowboys and the St George Illawarra Dragons at 1300SMILES Stadium on July 21, 2018 in Townsville, Australia. (Photo by Ian Hitchcock/Getty Images)

St George Illawarra’s Matt Dufty has been cleared to fly home from Perth after fracturing his cheekbone at the NRL Nines on Saturday.

The fullback was rushed to hospital after the nasty collision and there were fears he may have had to drive or catch the train home.

A return date for the 23-year old is currently unclear, with Dragons head of athletic performance confirming he would require surgery.

“Matt has a cheekbone fracture. Matt will require surgery to stabilise the fracture,” Pickworth told The Sydney Morning Herald.

“We will be consulting with specialists when we return home to determine the best course of action. Matt will be travelling home to Sydney with the team on Sunday.”

In further injury news, Cam McInnes (MCL) and Korbin Sims (forearm) both look set for a stint on the sidelines but will undergo further testing to confirm the severity of their injuries.

“Unfortunately Cameron has suffered a medial collateral injury to his left knee. When we return home, he’ll be undergoing scans to confirm the severity of the injury,” Pickworth said.

He added: “Korbin has a suspected fractured forearm.

“He will have scans upon returning home to determine the specific diagnosis of the injury.”