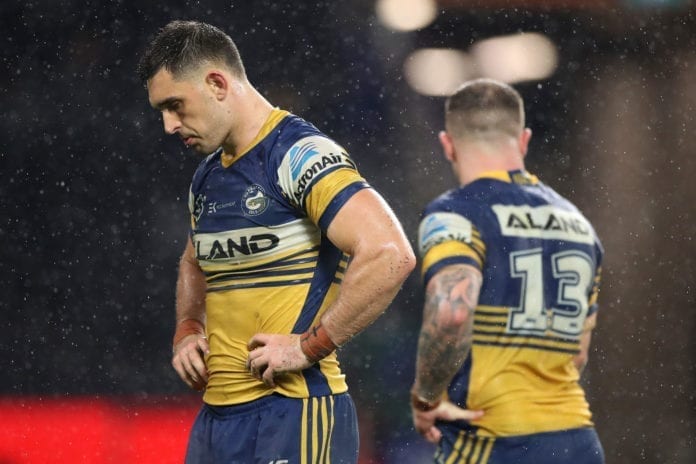 SYDNEY, AUSTRALIA – AUGUST 14: Ryan Matterson of the Eels looks dejected following the round 14 NRL match between the Parramatta Eels and the St George Illawarra Dragons at Bankwest Stadium on August 14, 2020 in Sydney, Australia. (Photo by Mark Kolbe/Getty Images)

The Parramatta Eels could be about to pull another late forward pack switch ahead of the 2022 NRL Grand Final, with reports suggesting late call-up Nathan Brown could be injected straight into the starting side.

The Daily Telegraph’s David Riccio told Triple M that a late swap between Brown and the club’s only premiership winner Ryan Matterson, who is currently named to start at lock, was looking likely.

“There is a little tip around that Brad Arthur could go with starting Nathan Brown with Matterson on the bench,” Riccio said.

The move would be similar to one employed by Arthur ahead of the preliminary final win over the North Queensland Cowboys, where Matterson was swapped with Marata Niukore at the eleventh hour.

Former State of Origin and Kangaroos prop and Triple M host Aaron Woods suggested the move didn’t go far enough, and that Brad Arthur’s men could be better served by keeping the switch from last week and also starting Junior Paulo from the bench.

“We did that with Origin, you’ve got a massive body on the bench.

“If Brown can hold his own against Fisher-Harris and Leota, then Paulo would come on when those two are off.

“It’s a big-thinking plan for Parramatta.”

While the late mail suggests another shake-up to the forward pack, Eels coach Brad Arthur has dismissed suggestions of a backline reshuffle to stop the Panthers putting pressure on Waqa Blake, who has endured recent struggles under the high ball – most pronounced in the first week of the finals.

“I know last time we played (Penrith) Waqa had some difficulties under the high ball, but you don’t tip blokes out on the back of one game,” the Eels coach said.