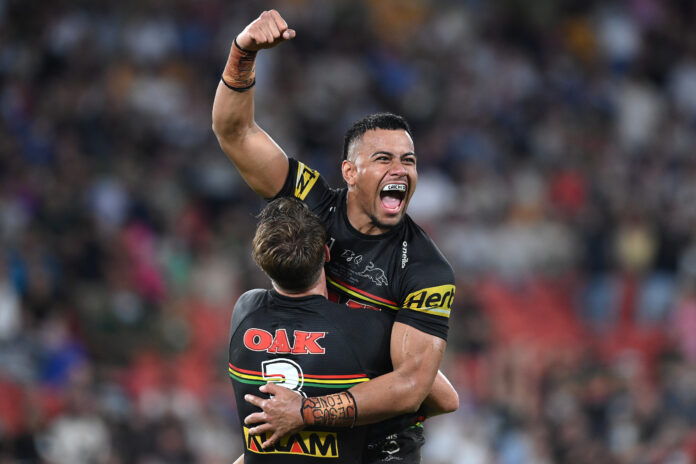 BRISBANE, AUSTRALIA – OCTOBER 03: Stephen Crichton of the Panthers celebrates with Paul Momirovski of the Panthers after winning the 2021 NRL Grand Final match between the Penrith Panthers and the South Sydney Rabbitohs at Suncorp Stadium on October 03, 2021, in Brisbane, Australia. (Photo by Bradley Kanaris/Getty Images)

The Canterbury Bulldogs have been revealed as the team with favouritism to win the signing of Penrith Panthers, New South Wales Blues and Samoan centre Stephen Crichton for the 2024 season and beyond.

The Panthers have already previously admitted they will need to shed at least two players per season to stay under the salary cap and at the top of the NRL as their junior academy continues to churn out talent to replace those leaving.

Crichton now appears as if he will be one of those players for the 2024 season, although the Panthers are said to be “desperate” to keep the star, who will be in for a major pay bump with his next deal following a number of years of sustained success.

According to Phil Rothfield, the Bulldogs are the favourites to sign Crichton.

Nothing done but it’s his most likely destination https://t.co/1fJAtK0iwo

The club have been on a recruitment rampage over the last two seasons, adding a stack of talent in an attempt to move the club away from the bottom of the table once their long-standing salary cap issues were moved on from.

Director of football Phil Gould has been aggressive in his moves, with Cameron Ciraldo joining the club to become the head coach in 2023, while Reed Mahoney and Viliame Kikau headline next year’s player movements.

It followed more than ten players arriving at the club for 2022, with some positive signs late in the season after a horror start to the season under Trent Barrett, who ultimately left his post after magic round.

Crichton has played 76 games for the Panthers since his 2019 NRL debut.