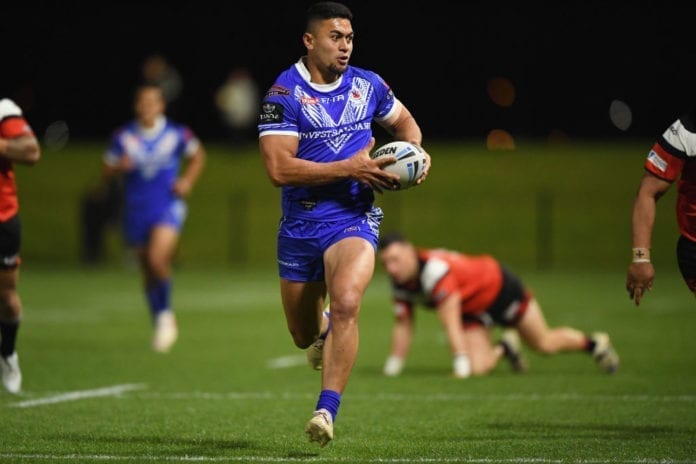 CHRISTCHURCH, NEW ZEALAND – OCTOBER 25: Tim Lafai of Samoa runs through to score a try during the Rugby League match between the Canterbury Bulls and Toa Samoa on October 25, 2019 in Christchurch, New Zealand. (Photo by Kai Schwoerer/Getty Images)

It was looking increasingly like Lafai’s career in the top flight was over. After a total of 165 games for the Bulldogs and Dragons between 2011 and 2020, he returned to the Bulldogs mid-way through the 2020 season.

He managed just five games though before being let go by the club, and he wasn’t picked up for 2021, eventually signing on with the Parramatta Eels to play New South Wales Cup.

With COVID ruining reserve grade for the year, the 30-year-old who has played 13 Tests for Samoa seemed to be a forgotten force in the elite level of the game, however, Salford have seen the value in Lafai.

The club had a disastrous 2021 campaign, finishing second last on the table, but avoiding relegation with the Leigh Centurions rounding out the table, finishing with just two wins from 22 games. Salford managed seven.

Lafai will join fellow internationals Ken Sio, Krisnan Inu, Pauli Pauli, Elijah Taylor and Darcy Lussick at the club, although Lussick is on loan with second-tier club the Featherstone Rovers. SYDNEY, AUSTRALIA – SEPTEMBER 09: Darcy Lussick of the Sea Eagles looks dejected after defeat during the NRL Elimination Final match between the Manly Sea Eagles and the Penrith Panthers at Allianz Stadium on September 9, 2017 in Sydney, Australia. (Photo by Mark Kolbe/Getty Images)

Lafai said he was excited by the opportunity in a club statement.

“I’m looking forward to this new chapter in my career and I can’t wait to get to work as soon as I arrive,” Lussick said.

“My family and I are excited to be part of the Salford community and we’re grateful for this opportunity.”

The signing became imperative for Salford with centres Harvey Livett and Kallum Watkins to miss the start of the season due to injury, and coach Paul Rowley said the club wouldn’t be able to fill a backline without Lafai’s arrival to start the season.

“As it stands, we would not be able to fill an established back line due to a few of our lads out through injury for the start of the season,” Rowley said.

“Not only does Tim help to fill a gap, he will fill it with much-needed experience and quality and I’m really pleased to have him on board.”