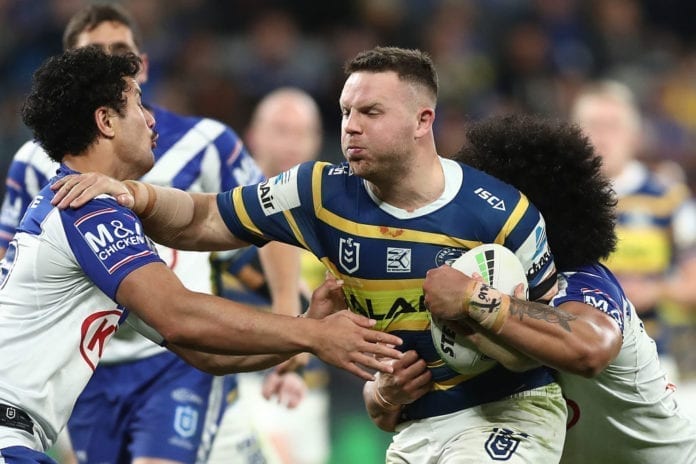 SYDNEY, AUSTRALIA – AUGUST 22: Nathan Brown of the Eels Is tackled during the round 23 NRL match between the Parramatta Eels and the Canterbury Bulldogs at Bankwest Stadium on August 22, 2019 in Sydney, Australia. (Photo by Mark Metcalfe/Getty Images)

Fresh from the news that he’ll make his first NRL appearance since Round 17 in the grand final, Parramatta Eels enforcer Nathan Brown has also been named in the Italy squad for the upcoming Rugby League World Cup.

Brown, who qualifies for Italy through his grandmother, also represented the Azurri at the 2017 tournament. He leads the squad for experience having played 138 NRL games and two State of Origin contests in 2020.

He’s joined by Melbourne Storm half Cooper Johns as the only capped NRL players in the team.

Italy have also named a number of players from the fringes of NRL squads but yet to make their first grade debut, including Parramatta’s Luca Moretti and Jack Colovatti, as well as South Sydney’s Jack Campagnolo and Cronulla’s Kyle Pickering.

Italy have been drawn alongside Australia, Fiji and Scotland in Group A. They kick off their campaign against the Bravehearts on October 16.