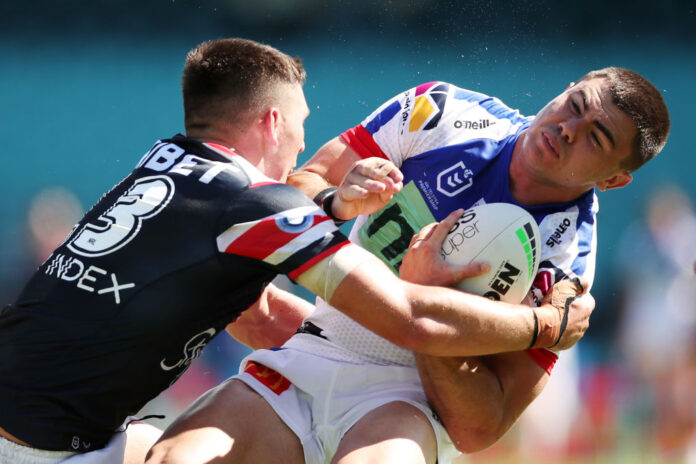 SYDNEY, AUSTRALIA – MARCH 12: Bradman Best of the Knights is tackled heavily by Victor Radley of the Roosters during the round one NRL match between the Sydney Roosters and the Newcastle Knights at Sydney Cricket Ground, on March 12, 2022, in Sydney, Australia. (Photo by Matt King/Getty Images)

Newcastle Knights centre Bradman Best has left the Newcastle Knights’ Round 11 clash with the Brisbane Broncos after suffering a sickening elbow injury during the second half.

With 27 minutes to go in the game and with the Knights on the attack, a shift left on the fourth tackle saw Kalyn Ponga throw a long wide ball to Best, who flicked it with an offload out of a three-man tackle to Edrick Lee.

He was bundled into touch, however, when Best hit the ground, his elbow was awkwardly contorted in hitting the ground at force.

He then got back to his feet with his elbow visibly out of place before immediately being taken to the dressing rooms by the Newcastle trainer.

Clear elbow dislocation for Bradman Best, bony deformity present after extreme hyperextension under contact. Unfortunately chance of fracture too. Recovery can be quicker than you’d think though, with most players returning within 6 weeks if no fracture present pic.twitter.com/r7YP2qz09q

The NRL Physio said that Best is likely to miss up to six weeks if no fracture is present, however, the star centre – who was in the State of Origin picture for New South Wales – will need to wait for the results of scans to confirm the extent of the injury.

Best had been having a match up with another rival in Kotoni Staggs for the New South Wales centre position which will replace another injured star in Latrell Mitchell, who is out with a hamstring injury but will be fit in time for Game 2.

The injury means Best’s slim chances of overthrowing either Staggs or Stephen Crichton for a spot in the New South Wales Origin side will likely be shelved.

The Broncos went on to win Thursday night’s game with the Knights after a convincing stretch during the second half.