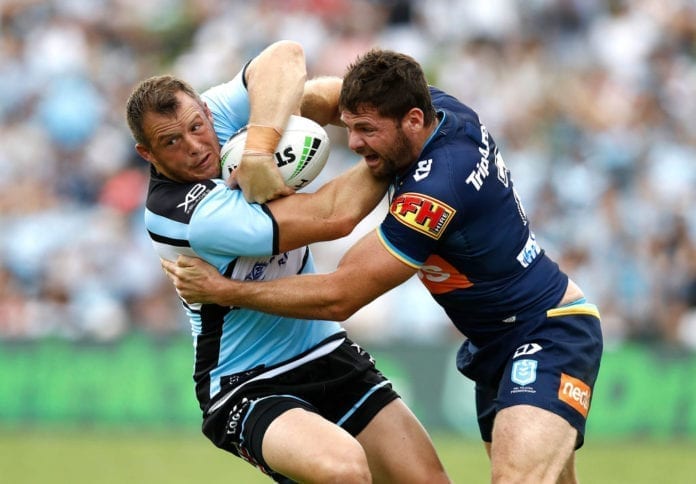 SYDNEY, AUSTRALIA – MARCH 23: Josh Morris of the Sharks is tackled by Anthony Don of the Titans during the round two NRL match between the Cronulla Sharks and the Gold Coast Titans at Shark Park on March 23, 2019 in Sydney, Australia. (Photo by Ryan Pierse/Getty Images)

Is Cronulla’s Josh Morris staying or going? A series of conflicting reports make it nearly impossible to read between lines.

It emerged last week that the veteran centre wanted to be released from the final year of his Sharks deal to re-up with brother Brett at the Sydney Roosters, a request that was denied by Cronulla.

The Sydney Morning Herald reported over the weekend that the 33-year old was “more determined than ever” to quit the Sharks following the way they reacted to his request for a release.

The report states that Morris was not even directly informed by the club that his request had been denied, instead hearing the news through the media.

However, teammate Aaron Woods has poured cold water on the speculation that Morris wants out.

“He just told the boys, he was honest and he’s always been honest,” Woods told the club website.

“He said: This is what’s happened, blah, blah, blah, and we respect that. It’s not like he’s dropping the shoulder and coming in and being angry and trying to duck and weave.

“He’s come in and just been Josh and that’s why he’s a great leader of the club. It’s probably a good opportunity for him to go there (the Roosters) but as a player at the Cronulla Sharks, I don’t want to let a leader like that go. He’s a leader and a role model.”

Woods resonated with Morris’ position, stating he knows how quickly things can change in the rugby league landscape.

“Things happen in rugby league, you know? I signed a four-year deal with the Bulldogs and six months later I was at the Cronulla Sharks,” the burly prop said.

“Things happen and it’s not always the player’s fault. Things happen behind the scenes at clubs that we don’t know what goes on.

“To his credit he’s come back and ripped in. Three tries today, he had a kid last week and he’s jumped on the plane to play with the boys so it shows the character of the bloke.

“He’s been enormous. His numbers at training have been phenomenal and you can tell, it’s the fittest he’s been in a long time.

“He had a great pre-season. I think he missed one or two sessions and that’s because his wife had a baby.”