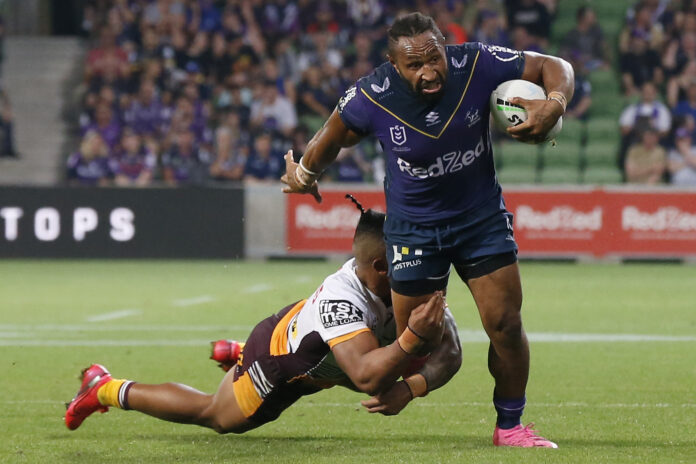 MELBOURNE, AUSTRALIA – APRIL 02: Tesi Niu of the Broncos tackles Justin Olam of the Storm during the round four NRL match between the Melbourne Storm and the Brisbane Broncos at AAMI Park, on April 02, 2021, in Melbourne, Australia. (Photo by Darrian Traynor/Getty Images)

Last year’s Dally M centre of the year, who has been with the Storm since making his NRL debut, has been hotly pursued by other clubs even though he isn’t off-contract until the end of 2023.

The final year of the current deal is a club option for Olam, meaning it was going be down to Melbourne whether he would remain in purple next year.

It has been reported other teams have shown plenty of interest in the star, who will represent Papua New Guinea at the end of year Rugby League World Cup.

But, according to Fox Sports all of those other teams are likely going to miss out. Despite Melbourne’s salary cap being stretched to within an inch of its life following big-money moves to keep Ryan Papenhuyzen, Harry Grant and Jahrome Hughes on long-term deals, as well as the battle to retain Cameron Munster at the club, they are set to lock Olam down on a new deal which will keep him at the club until the end of 2025.

It’s understood the deal will be a new three-year deal, which will upgrade the final year of the contract that was originally marked down as a club option.

The gun 28-year-old centre, who has quickly become one of the most consistent and damaging in the competition, has scored six tries in ten games this season and averages north of 120 metres per game, while he also has eight line breaks, 44 tackle busts and 16 offloads for the season to date.

He forms a damaging centre combination with Reimis Smith at the club, who was also recently locked down on a new deal to remain in the Victorian capital.

The news follows Craig Bellamy’s decision to stay on as head coach for 2023, which was officially confirmed on Wednesday evening by the club.