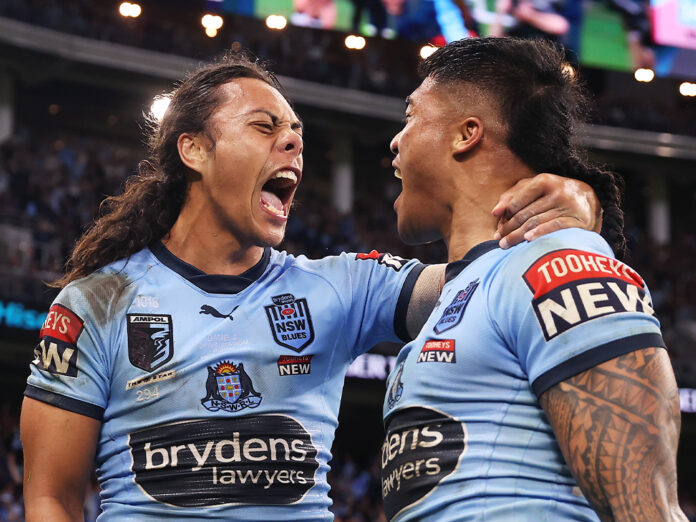 PERTH, AUSTRALIA – JUNE 26: Brian To’o of the Blues (R) celebrates with Jarome Luai (L) after scoring a try during game two of the State of Origin series between New South Wales Blues and Queensland Maroons at Optus Stadium, on June 26, 2022, in Perth, Australia. (Photo by Mark Kolbe/Getty Images)

Just months after earning the attention of the NRL Integrity Unit for his use of an inappropriate term in a social media post, Penrith Panthers five-eighth Jarome Luai could be in trouble again after using the same term in his best man speech at the wedding of Panthers and Samoa teammate Brian To’o.

The traditional Samoan ceremony was live-streamed, giving friends, family and football fans the world over an amazing glimpse into the glamorous festivities. A number of Panthers players were involved in the ceremony.

But the decision to stream the event has the potential to land Luai in hot water after he used the same racially-charged term as the controversial post to describe his relationship with To’o. That particular excerpt of the speech is now doing the rounds on social media.

But that wasn’t all that Luai divulged during his best man speech, with a unique but perhaps unnecessary insight into his time sharing a room with To’o during the World Cup.

“My uso loves himself. If his phone gallery gets leaked one day, that’ll be the proof,” Luai said, after making jocular comments on the personal hygiene of To’o that don’t need to be printed.

“Seven weeks in England, walked into the room and basically all I seen was my uso taking selfies, my uso… face-timing (fiancée) Moesha.

“Sometimes I walk in, I hear things in the toilet,”

Luai reportedly back-tracked some of those comments soon after, following some stern looks from To’o.

But it was the use of a certain term during the speech to describe his friend that stole the focus in the immediate aftermath.

Luai courted controversy following the 2022 Grand Final for using the term in a social media post with Jaeman Salmon which was quickly deleted.

Though the NRL Integrity Unit was made aware of the post, Luai ultimately faced no sanction.

The term was defended as one of affection between friends at the time, but that response drew severe criticism in the aftermath which could prompt further action this time around.