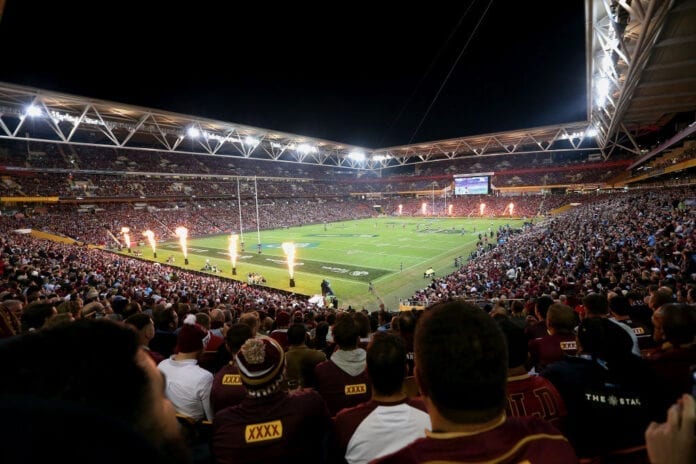 BRISBANE, AUSTRALIA – JUNE 05: A general view during game one of the 2019 State of Origin series between the Queensland Maroons and the New South Wales Blues at Suncorp Stadium on June 05, 2019 in Brisbane, Australia. (Photo by Jono Searle/Getty Images)

The NRL’s magic round concept could be thrown up in the air as the competition pushes ahead with its expansion plans.

While the magic round – which has been held in Brisbane on each occasion so far – has worked perfectly with 16 teams, that becomes a different story once the competition goes to 17 teams.

The NRL are currently deep into the process of selecting a 17th team for the competition, with the Redcliffe Dolphins tipped to be the favourites ahead of the other bids in the Brisbane Jets and Brisbane Firehawks.

There had been discussions suggesting the Jets and Firehawks would merge in an attempt to go past the Dolphins as the NRL’s preferred bid.

The idea of magic round is to have all the teams play at the same venue on one weekend, and it would be incredibly difficult to have one team miss out on the concept.

The Daily Telegraph’s Robert Craddock has revealed the problem the NRL faces, with the competition likely to give a team a bye for the magic round, despite the obvious problems that come with that.

Magic round is currently under contract with the Queensland Government until the end of the 2022 season, however, after that, magic round is free to be moved around the country as the NRL please with no contract locked in.

That means magic round could become a short-term casualty of expansion, given the NRL may elect not to hold the round or find a new home for the concept in 2023. The new franchise is tipped to arrive in either 2023 or 2024, with the NRL and ARLC set to make an announcement sometime in October.