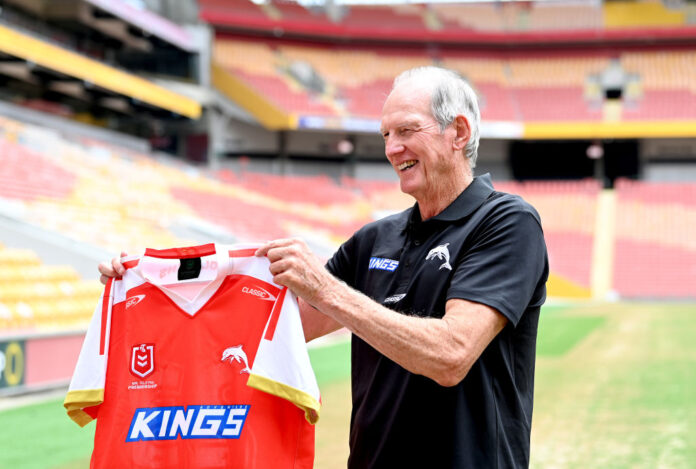 BRISBANE, AUSTRALIA – OCTOBER 27: Wayne Bennett poses for a photo with the revealing of the Dolphins Heritage jersey and a new sponsor in Kings Adventure during a Dolphins NRL press conference at Suncorp Stadium on October 27, 2021 in Brisbane, Australia. (Photo by Bradley Kanaris/Getty Images)

Tevita Pangai Junior has reportedly made a contract commitment to the Canterbury Bulldogs, telling teammates he has no plans to relocate to Redcliffe following the exit of former head coach Trent Barrett.

The news comes as Kai Pearce-Paul – an English young gun – has reportedly selected the Newcastle Knights as his next home.

Barrett’s exit has dominated headlines this week, with reports that many players could follow him out the door at Belmore.

Brent Naden was the first just 24 hours later after he secured a release to join Michael Maguire and the Wests Tigers, where he will play against his old club this weekend.

Pangai Junior, whose form has been slightly erratic at Belmore, and with Wayne Bennett suggesting previously that he would “sign the second rower in a heartbeat,” has been a name who is constantly in the media this week.

However, Fox Sports are reporting that Pangai Junior has told teammates he won’t be exiting Canterbury and will instead see out his three-year deal as the club looks to turn things around. In his first season at Belmore, the Bulldogs hold a record of two and eight, despite promised improvements to the club following last season’s wooden spoon, a number of seasons in the rugby league wilderness at the bottom of the table and an off-season signing spree led by Barrett and director of football Phil Gould.

Despite previously suggesting Pangai Junior is a player he would target, Bennett told the media that he didn’t think Pangai Junior would be keen to exit.

“He’s on a three-year contract there, so I don’t know if he’ll be real keen to give that up,” Bennett added.

“Their (Bulldogs’) best players they’ll want to keep obviously, so after that I’ll have to wait and see what falls out.”

Pearce-Paul, on the other hand, will likely move to Australia in 2023.

He has been heavily on Newcastle’s radar in recent times, and was reportedly being chased by as many as five clubs.

A 21-year-old second rower who plays for Wigan, he has already represented the England Knights, but according to Bennett, has selected to sign with the Knights.

“We’ve talked to a number of new players in the UK but he’s gone to Newcastle as far as I understand,” Bennett said.