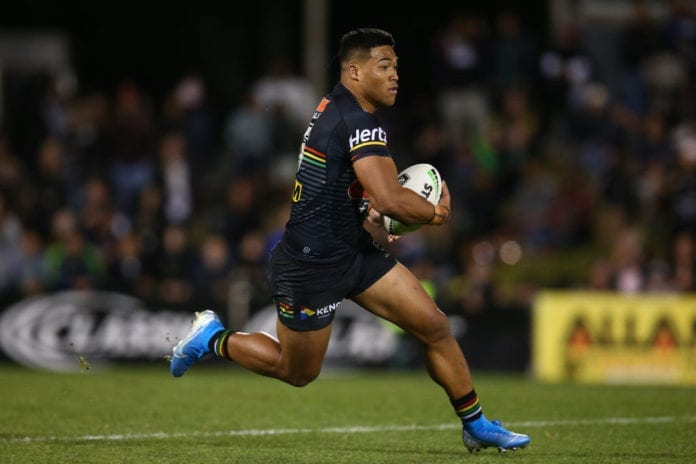 PENRITH, AUSTRALIA – JULY 28: Brian To’o of the Panthers runs the ball during the round 19 NRL match between the Panthers and Raiders at Panthers Stadium on July 28, 2019 in Penrith, Australia. (Photo by Jason McCawley/Getty Images)

The Penrith Panthers are facing a humungous injury crisis heading into the preliminary finals, with all of Viliame Kikau, Mitch Kenny, Brian To’o and Dylan Edwards under a cloud.

According to Channel 9s Danny Weidler, all four players failed to take part in Monday’s recovery session, and may be lucky to train this week.

LATEST: Vili Kikau didn’t take part in Panthers pool session due to cut on his knee. He has a low grade ankle sprain. Brian To’o in moon boot. Unlikely to train this week. Day by day for game. Mitch Kenny was on crutches. Dylan Edwards limping. @9NewsSyd @NRLonNine

To’o was ruled out of Penrith’s successful semi-final win over the Parramatta Eels on Saturday night as the club got the job done in a low-scoring thriller.

The club originally called To’o missing out on the game a “minor foot complaint”, however, he was still in a moon boot on Monday and is now unlikely to train at all this week, with the star winger to be a game day decision.

One of the NRL’s leading ball-runners missed out on a chunk of action at the back-end of the season, although it’s unclear if this is a flare-up of the old injury, or something new.

Kenny was taken from the field in the final minutes of the game against the Eels in controversial circumstances, with the trainer stopping play from the sideline despite not carrying out an assessment for the back-up hooker.

The club are yet to provide an official update on Kenny.

It’s also understood Dylan Edwards was struggling with a limp, although he did finish the game and there is no immediate concern that he will miss this week.

Kikau’s leg cut is a concern though. He was brought from the field before the end of the contest against the Eels in clear discomfort, and may be in a similar position to Cameron Munster, who only just passed fitness to play in the qualifying final last weekend.