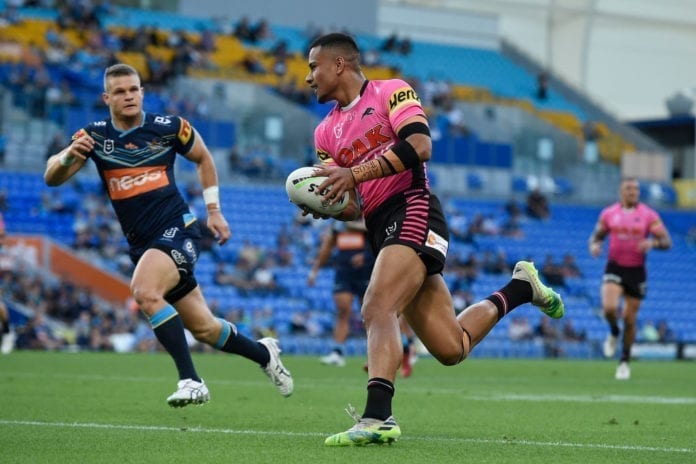 GOLD COAST, AUSTRALIA – JULY 26: Stephen Crichton of the Panthers scores a try during the round 11 NRL match between the Gold Coast Titans and the Penrith Panthers at Cbus Super Stadium on July 26, 2020 in Gold Coast, Australia. (Photo by Matt Roberts/Getty Images)

Penrith Panthers star centre Stephen Crichton is reportedly being hotly pursued by as many as four clubs on the NRL’s free agency market.

Crichton is off-contract at the end of 2023, and reports have widely speculated that Penrith will struggle to match the money he could be paid from other clubs.

That comes with Penrith’s salary cap being stretched on the back of big-money deals for the likes of Nathan Cleary, Isaah Yeo, James Fisher-Harris, Moses Leota, Jarome Luai and Dylan Edwards.

It was reported last week that the Dolphins will make a significant play for Crichton, although that report was debated heavily from well-connected sources from the foot of the mountains.

It was unclear at the time if any other clubs had expressed interest in Crichton, however, that appears to have now expanded, with Fox Sports reporting as many as four clubs are interested in the gun centre.

Crichton could be in line for a State of Origin debut this year and is free to field offers from other clubs from November 1 should he elect to leave the defending premiers, who are mostly made up of local juniors, of which Crichton is one.

It comes as the Panthers reportedly are set to announce Izack Tago on an upgraded, extended deal, which will squeeze their already at breaking salary cap further.

That comes despite the club losing Apisai Koroisau to the Wests Tigers next year, on the back of the departures of Kurt Capewell (Brisbane Broncos), Paul Momirovski (Sydney Roosters) and Matt Burton (Canterbury Bulldogs) ahead of the 2022 season.

The Panthers also have young gun Thomas Jenkins, Spencer Leniu, Scott Sorensen and Charlie Staines off-contract at the end of 2023.