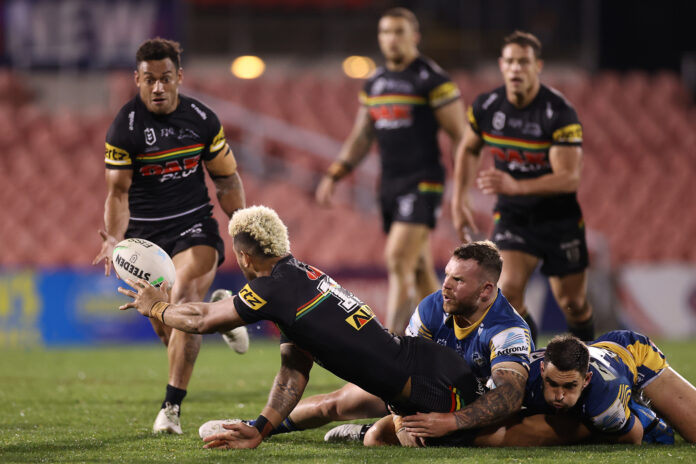 SYDNEY, AUSTRALIA – JULY 02: Viliame Kikau of the Panthers offloads the ball to Apisai Koroisau of the Panthers during the round 16 NRL match between the Penrith Panthers and the Parramatta Eels at BlueBet Stadium on July 02, 2021, in Sydney, Australia. (Photo by Mark Kolbe/Getty Images)

The Penrith Panthers have claimed they are confident of holding onto gun Fijian second-rower Viliame Kikau.

CEO Brian Fletcher told Sky Sports Radio’s Big Sports Breakfast on Monday morning that Kikau was likely to say, however, his comments will leave star hooker Apisai MKoroisau concerned about his future at the club.

“The only big-name left for us to sign for the future is Viliame Kikau,” Fletcher said.

It’s widely acknowledged that Penrith are in the midst of a salary cap crunch, having granted contract extensions this year to Stephen Crichton, James Fisher-Harris, Spencer Leniu, Moses Leota, Jarome Luai and Isaah Yeo among others.

All of those players would have received upgrades, while it’s well-noted Nathan Cleary is on a monster deal at the club, squeezing their salary cap to within an inch of its life. SYDNEY, AUSTRALIA – OCTOBER 20: Apisai Koroisau of the Panthers looks on during a Penrith Panthers NRL training session at Panthers Stadium on October 20, 2020 in Sydney, Australia. (Photo by Mark Kolbe/Getty Images)

Kikau is also likely to receive an upgrade from his reported figure of around $700,000, with some suggesting he could be take as much as $900,000.

It had been reported that Penrith were all but resigned to losing Kikau from the club at the end of the 2022 season as they focused their salary cap into other parts of the roster.

Kikau was heavily linked with the Dragons among other clubs, although he at one point slammed the rumours as “fake news.”

Also off contract at the end of 2022 are Dylan Edwards, Matt Eisenhuth, Robert Jennings, Paul Momirovski and youngster Lindsay Smith.

Fletcher’s comments suggest the club is going full steam ahead to retain Kikau though.

“We’re very confident that we will be able to come to an agreement with his management and have him on the roster for another three or four years as well,” Fletcher said.

“Every indication is that he’ll be staying.

“A lot of players like to take a little bit of a discount to play with a side that’s going well, so I think he comes under that category. SYDNEY, AUSTRALIA – MARCH 20: Viliame Kikau of the Panthers makes a break during the round two NRL match between the Canterbury Bulldogs and the Penrith Panthers at Bankwest Stadium, on March 20, 2021, in Sydney, Australia. (Photo by Mark Kolbe/Getty Images)

“He’s been there ever since he was a young player and he has got a home out in Penrith, and he’s very good friends with all the Polynesian boys.”

Penrith’s salary cap situation is eased by the departure of Kurt Capewell, however, it won’t answer all the questions as they attempt to lock down key names before the November 1 deadline.