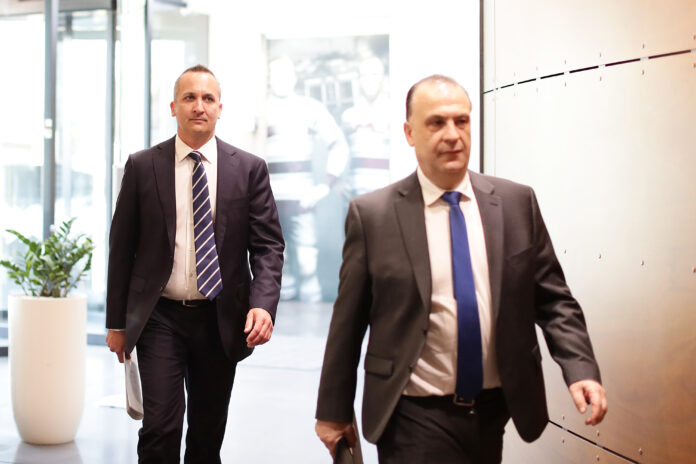 The NRL are reportedly beginning the process to complete an overhaul of the way players’ contracts and transfers between clubs are dealt with.

Under the current system, players can swap clubs anywhere up to 12 months before they expire on November 1, and the media circus that follows during the off-season is a headline driver to say the least.

This year alone the NRL has dealt with the ongoing public tour of Brandon Smith followed by his podcast, the Parramatta Eels’ cap crunch, and the futures of Penrith stars Viliame Kikau and Apisai Koroisau, the former of who was leaked in a Bulldogs’ polo with a full season left to play at the foot of the mountains.

That then leads to fans having to cheer on players who have already signed for another club the following year – as we have already seen the likes of Isaiah Papali’i, Marata Niukore, Felise Kaufusi and reportedly Smith, Reed Mahoney and Kikau do this year.

The NRL are reportedly keen to stop the madness, with specific transfer windows – as we see in other sports around the world – likely to be created.

However, for that to come to be, the NRL will need the support of the players, and the Rugby League Players Association. According to a Sydney Morning Herald report, the bulk of players currently don’t want change.

The collective bargaining agreement is due for renewal at the end of 2022, and changes could be moved through then, however, it’s understood the RLPA are of the firm belief trade windows won’t work in the NRL.

“The reality is there is no cookie-cutter approach to trade and transfer windows [that works],” RLPA chief executive Clint Newton told the publication.

“Trade windows have not been proven to quell fan discontent. There are many examples globally where it doesn’t actually reduce it.

“There’s no evidence to suggest that it will resolve some of the current public frustration.

“There are huge amounts of players who have signed with another club and go on to make a contribution [to their current club].

“No one could have doubted Adam Reynolds’ commitment [to Souths after signing with Brisbane]. So what is the appropriate time frame that is going to remove all doubt on a players’ ability and willingness to put in for their current club?

“I don’t have any doubt that Brandon or any other player will be doing the best they can for their team.

“We don’t believe implementing a specific window will reduce the speculation that goes on in relation to player movement. You’re talking about reducing the options a player has for improving fan sentiment, but there’s no evidence that the trade windows in the EPL, NBA, AFL have significantly reduced fan discontent.”

At the crux of the issue is players seeking as much value as possible out of their deals, and it’s understood they believe having more time – as they do now – is the best way for that to happen.

Issues surrounding expansion of the competition and new teams will also need to be considered as the NRL and RLPA negotiate the new agreement, with the Dolphins currently struggling to sign new talent, having made just one signature since they were allowed to begin negotiations on November 1.