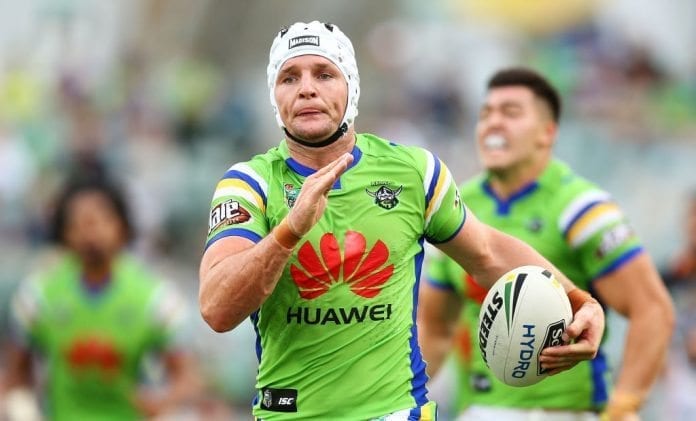 CANBERRA, AUSTRALIA – MARCH 19: Jarrod Croker of the Raiders makes a line rbeak during the round three NRL match between the Canberra Raiders and the Wests Tigers at GIO Stadium on March 19, 2017 in Canberra, Australia. (Photo by Mark Nolan/Getty Images)

The Canberra Raiders look set to retain the services of Jarrod Croker and Nick Cotric just a week after locking down Jack Wighton.

According to The Daily Telegraph, the duo are likely to sign on for a combined $4.5 million with that total bumping up to $7.7 million when including the deal reached with Wighton last week.

Croker is seeking a four-year deal, with the final year set to be incentive-based. Cotric however hasn’t decided on the length of the deal he is seeking whether it be two, three or four years.

Croker is said to be priced at around $600,000 a year while Cotric is just below on $500,000. According to Paul Sutton, Croker’s manager, a deal between the two parties is imminent.

“Jarrod wants to stay and finish his career there,” Sutton said. “We will try and get a deal to see that out. I will probably go down to Canberra next week or the week after to see Don Furner. I don’t think it’s too far away. It’s pretty close.”

The two have knocked back interest from rival clubs to stay loyal to the Raiders, the clubs CEO Don Furner said the club are keen to lock down the duo, “It’s our aim to have both players — who have been terrific for us — re-signed before season kick-off so their futures are settled.”