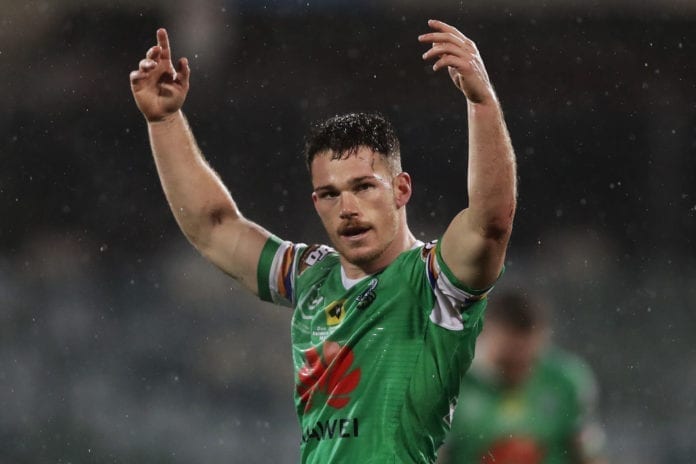 CANBERRA, AUSTRALIA – JULY 25: Tom Starling of the Raiders celebrates victory in the round 11 NRL match between the Canberra Raiders and the South Sydney Rabbitohs at GIO Stadium on July 25, 2020 in Canberra, Australia. (Photo by Mark Metcalfe/Getty Images)

Canberra Raiders dummy-half Tom Starling has appeared in court to describe the events of a brawl that occurred in Avoca Beach over two years ago, denying that he resisted police and instead detailing how he lost consciousness after being allegedly assaulted.

Starling and his brothers were at the Shady Palms hotel for a 21st birthday party before the melee occurred, with the NSW Police Riot Squad eventually called, per NCA Newswire. They are accused of resisting police in the execution of their duty.

The court heard that the incident was instigated after a security guard at the venue allegedly used a slur against Starling’s mother, which elicited a strong reaction from the family.

Starling described being repeatedly punched in the face by a police officer as he tried to aid his brother Josh, to the point he lost consciousness.

“My head was shoved forward, I copped three, maybe four uppercuts in a short burst and I was driven backwards.”

Starling was initially uncertain who was striking him as he covered his face to defend himself, before he “poked” his head up and saw it was a police officer. Starling’s account was supported by another witness, and CCTV appears to verify an officer repeatedly punching Starling in the face.

“I knew I gotta (sic) keep my head up because I gotta see these blokes coming,” Starling said.

“A barrage of punches and elbows come my way and one of them hits me flush and knocks me unconscious.”

Starling said that as an NRL player he was familiar with the symptoms of concussion, saying he was left dazed and with holes in his memory.

Starling’s co-accused, Jesse Byrne, was also dragged into the fracas as he tried to assist his mate.

“I just saw Tom getting rammed… and this big dude had him by the scruff of the neck,” Byrne told the court.”

Byrne told the court that he tried to protect Starling before he himself was blindsided by a punch to the jaw and pepper sprayed from close proximity. His eyes were swollen shut by the time he was escorted into a police van. He required stitches and sustained significant swelling to his eyes and head.

The hearing will continue next week.