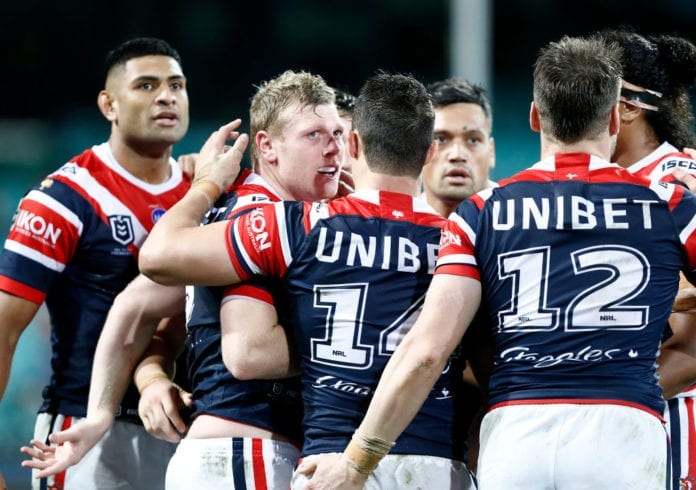 SYDNEY, AUSTRALIA – JUNE 16: Drew Hutchison of the Roosters celebrates after scoring a try during the round 14 NRL match between the Sydney Roosters and the Canterbury Bulldogs at the Sydney Cricket Ground on June 16, 2019 in Sydney, Australia. (Photo by Ryan Pierse/Getty Images)

Senior Sydney Roosters player have been offering financial help to their junior teammates during the shutdown of the NRL because of the coronavirus pandemic.

Technology has been used to keep in contact with teammates, particularly a WhatsApp group chat, with Victor Radley noting the leadership qualities of teammates Jake Friend, Jared Waerea-Hargreaves, Luke Keary and Boyd Cordner have shown throughout these trying times.

Many players are facing uncertain futures, especially off-contract, fringe first grader and rookies who are looking to break onto a NRL team.

“We’ve got a couple of young kids that could be struggling and I’ve seen all these leaders stand up and help every single young boy out,” Radley said.

“If any of us ever needed anything, they were the first to offer up whatever it was, even if it was cash. They’ve all offered cash to everyone—’Boydo’—so if anyone’s struggling we’ve got a really tight thing that’s been going on in our group chat which makes me feel really safe.”

Yet the game’s suspension has been an eye-opening experience for Radley and many others in the league.

“The last three years I’ve kind of being in a fairyland and something like this has rocked myself and a lot of players back into realisation,” he said.

“It’s made it a bit different for the rest of my future. I think I’m going to make sure I’ve got stuff after footy really set up and I want to be a bit better with my money. I’ve just been spending my money on anything so it’ll be good to take me out of fairyland a bit.”

Radley has a carpentry background and has picked up the tools in light of the recent league suspension. Other players have also joined the workforce to help support themselves and their families.

“I did a bit of carpentry before I started playing footy,” he said.

“The old man’s a builder so I’ve been doing a bit of stuff with him. Me an Keary have been going around and fixing stuff up and building little decks and stuff. It’s been fun.

“Keary rang me and said: ‘mate, I need to work’. I don’t know if he wants to get out of the house but he’s been working with me every day. he’s a good worker.

“I’ve kind of been running the show. He’s kind of my little apprentice, little bitch, pass me this, pass me that, so it’s been good.”