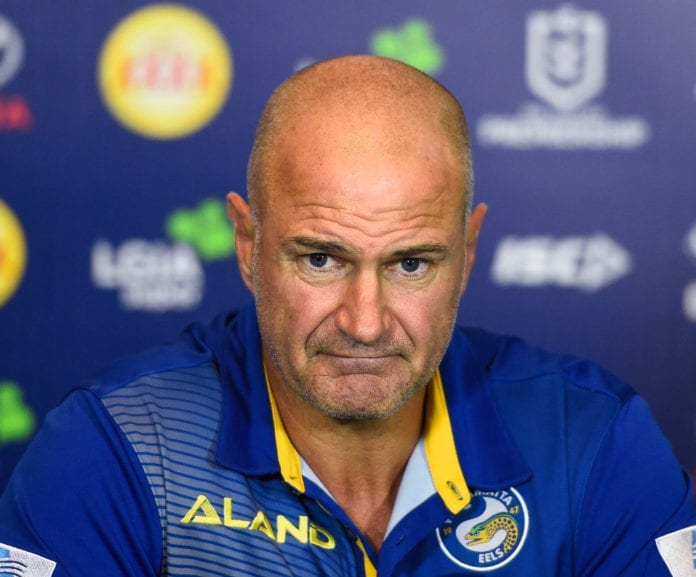 TOWNSVILLE, AUSTRALIA – MAY 18: Eels coach Brad Arthur speaks at the post match media conference at the end of the round 10 NRL match between the North Queensland Cowboys and the Parramatta Eels at 1300SMILES Stadium on May 18, 2019 in Townsville, Australia. (Photo by Ian Hitchcock/Getty Images)

Six NRL clubs stood down staff on Wednesday as cost cutting measures roll out in the wake of the 2020 season ending.

Other clubs shut their doors immediately.

According to Sydney Morning Herald; the Canterbury Bulldogs, North Queensland Cowboys, Parramatta Eels, Newcastle Knights, Penrith Panthers, and Cronulla Sharks are asking staff to take some form of leave from their duties.

The majority of staff at the Bulldogs have been told to take annual leave and when that has been used up, unpaid leave will continue. Canterbury Bulldogs were one of the first teams to stand down their high performing and coaching ranks as the season ended.

Cowboys chairman Jeff Reibel spoke about the difficult position for the club as staff were told to take leave on Wednesday.

“it was excruciatingly difficult to let our people know, through no fault of their own and in spite of their incredible talent they share with our club on a daily basis, that their position were stood down.”

On Wednesday, the Eels stood down many of their staff and have asked them to take leave. If staff have none, they will be facing unpaid leave while the crisis plays out. Only a small amount of admin and welfare staff remain at the club.

Administration staff at the Knights are still working for the time being. All other staff have been told to take leave immediately.

Almost all staff at the Panthers are on annual leave. The club is facing financial difficulties with the shutdown of games and trade.

A small amount of football operations and administration staff remain at the Sharks with the remaining staff told to take annual leave. Chief Executive Dino Mezzatesta is not being paid and has told players they will be facing pay cuts in the foreseeable future.

While the South Sydney Rabbitohs have only a skeleton staff remaining at the club and players training from home, all football staff have been given two weeks pay while losing their jobs.