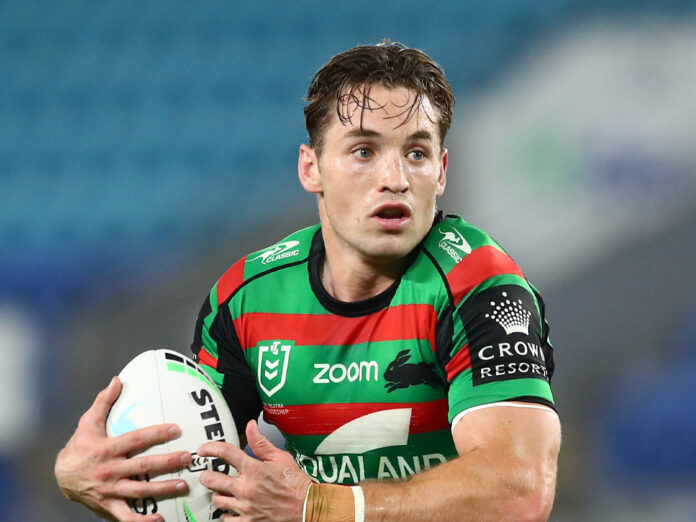 GOLD COAST, AUSTRALIA – JULY 18: Cameron Murray of the Rabbitohs during the round 18 NRL match between the South Sydney Rabbitohs and the Canterbury Bulldogs at Cbus Super Stadium, on July 18, 2021, in Gold Coast, Australia. (Photo by Chris Hyde/Getty Images, Image supplied by Kayo)

South Sydney skipper Cameron Murray is reportedly set to return to action sooner rather than later after being laid low with a shoulder complaint.

After sustaining the injury during the Rabbitohs’ Round 9 loss to the Broncos, Murray spent Magic Round on the sidelines, missing his side’s desperate 32-30 victory over the Warriors in the Sunshine State.

Though initial reports offered by club physio Eddie Farah claimed that the Blues representative could expect to sit out 3-4 weeks after undergoing a minor procedure on the ailing joint, Murray is said to have made significant ground in his recovery.

“He had a procedure to clean out his shoulder. He is already back in rehab, feeling really good, much better already. He is starting the strengthening process and everything is healing up nicely.

“He will continue to build to be back playing in two or three weeks.”

However, with the tough-as-nails lock desperate to make an impact for Jason Demetriou’s teetering team list, News Corp journalist Dave Riccio has reported that the Mascot junior has circled Souths’ Round 12 date with Wests to re-lace the boots.

Cameron Murray is aiming to return earlier than expected in his recovery from shoulder surgery – aiming to play in Round 12 pending fitness test (via @DaveRic1). Had called Brad Fittler 10 days ago to rule himself out of Origin 1, was facing 3-4 weeks out. Now should be available

Given this ability to bravely bite the bit and potentially pull on the cardinal and myrtle earlier than expected, Murray will almost certainly re-enter Brad Fittler’s blueprints for Origin I on June 8.

Should Murray’s optimism prove prophetic, Demetriou will only be asked to field one final side without the baby-faced bruiser.

The Redfern club is currently clinging to the ladder’s eighth rung and are fixtured to face Canberra at Accor Stadium on Sunday afternoon.