Special occasions: Roosters not done with SCG ahead of exit 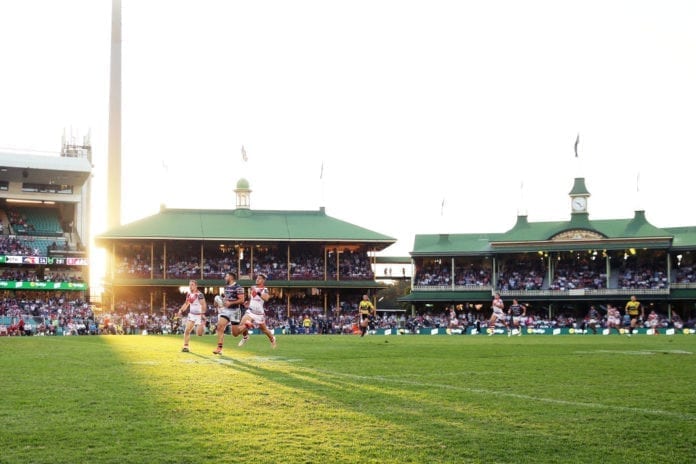 SYDNEY, AUSTRALIA – APRIL 25: James Tedesco of the Roosters makes a break during the round 7 NRL match between the Sydney Roosters and the St George Illawarra Dragons at the Sydney Cricket Ground on April 25, 2019 in Sydney, Australia. (Photo by Matt King/Getty Images)

The Sydney Roosters aren’t finished with playing at the Sydney Cricket Ground despite their impending move back to the rebuilt Sydney Football Stadium.

The Roosters will open the rebuilt venue in Round 25, with an NRLW clash against the St George Illawarra Dragons, before the men’s team reopen the book of feuds against the South Sydney Rabbitohs later that evening.

“When we’re at Allianz, (the SCG) has been our second home,” Robinson told the media after the club’s captain’s run ahead of Saturday’s game with the Wests Tigers.

“It won’t be our last time forever on that ground but it will only be for special occasions.”

It comes as the South Sydney Rabbitohs also plot their own move back to Moore Park, having moved out of the precinct and across to Homebush in 2008.

Breaking that deal with the NSW government on the back of the Olympic Stadium not receiving promised funding isn’t yet across the line, however, appears somewhat likely.

The Roosters, however, are the main NRL tenant at Moore Park, and will share the new ground with the NSW Waratahs, Sydney FC and other events, including next year’s women’s FIFA World Cup.

While it was thought that the Roosters would take games north to the Central Coast during that period, Robinson’s comments also pave the way for a handful of games to be played across the road at the Cricket Ground during that period.

AAP reports the NRL will place no restrictions on the Roosters, and that they will be able to shift games to the SCG during the year.

An idea of the home venue structure for the tri-colours should be provided in November when the NRL release the draw for 2023, which will include byes every week for the first time since the Gold Coast Titans entered the competition.