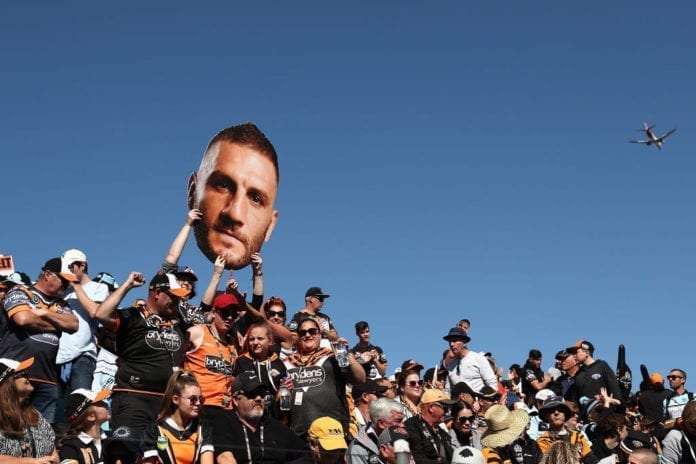 SYDNEY, AUSTRALIA – SEPTEMBER 08: A general view of the crowd during the round 25 NRL match between the Wests Tigers and the Cronulla Sharks at Leichhardt Oval on September 08, 2019 in Sydney, Australia. (Photo by Mark Metcalfe/Getty Images)

Wests Tigers have been left frustrated by the NSW Governments decision to hand funding to revitalise Netsrata Jubilee Oval as well as plans to renew venues for both Manly and Penrith, with the Tigers missing out on a piece of the pie, per The Sydney Morning Herald.

Kogarah is in line for a $3 million upgrade after the government abandoned an $800 million plan to redevelop ANZ Stadium, with Brookvale and Penrith set to gain from the change of heart as the league looks to gain funds for several “mini Bankwest Stadiums”.

While the Dragons, Panthers and Sea Eagles are all set to gain major facelifts and new suburban grounds, Tigers chairman Lee Hagipantelis has expressed his disappointment that Leichhardt Oval and Campbelltown Sports Stadium won’t receive any upgrades from the government.

“You can’t expand or grow the game unless you look after your own backyard,” Tigers chairman Lee Hagipantelis said.

“And the backyard of the NRL is traditionally suburban Sydney, even though it has expanded successfully to Melbourne and Queensland. But you can’t forget its roots.

“I don’t think any stadia policy dealing with the suburbs could overlook Liverpool, Leichhardt or Campbelltown.

“You couldn’t possibly put into place any sort of proposal that wouldn’t include one of those locations.

“I don’t need to urge the government because it would be so obvious that it wouldn’t need stating. It would be impossible to develop a football stadium in the suburbs for the purpose of promoting the game without seriously considering Campbelltown or Liverpool or Leichhardt.

“It would be a huge oversight if they ignored the traditional heartland of the south-west of Sydney.”

Parramatta have flourished since their arrival to Bankwest Stadium, with the Tigers keen more a rise up the league as their finals drought continues.