“Try to implement those things into my game”: Hynes happy to be Blues apprentice SYDNEY, AUSTRALIA – MARCH 19: Nicholas Hynes of the Sharks runs with the ball during the round two NRL match between the Cronulla Sharks and the Parramatta Eels at PointsBet Stadium, on March 19, 2022, in Sydney, Australia. (Photo by Matt King/Getty Images)

He hasn’t played a minute so far this Origin series, but that hasn’t stopped Nicho Hynes from turning his time in camp into an invaluable learning experience.

Selected as 18th man for both of the first two State of Origin matches for New South Wales, Hynes may not be the one out there dominating the game, but spending time around those that are can be just as a vital when it comes to evolving your game.

Hynes has spent the last nine months learning how to become a halfback after starting his career at fullback, and even if it’s just for a few days in camp, the chance to learn off the game’s number one halfback has taught him plenty already.

“Those little things, watching him (Nathan Cleary) do his extras, is good to watch: goalkicking, kicking, he’s just the ultimate professional. You can see why he’s one of the best players of the game” Hynes told the Sydney Morning Herald.

“He just wants to be the best and took that first loss pretty hard on himself. You look at his performance (in game two) and he absolutely killed it – one of the best performances you will ever see.” 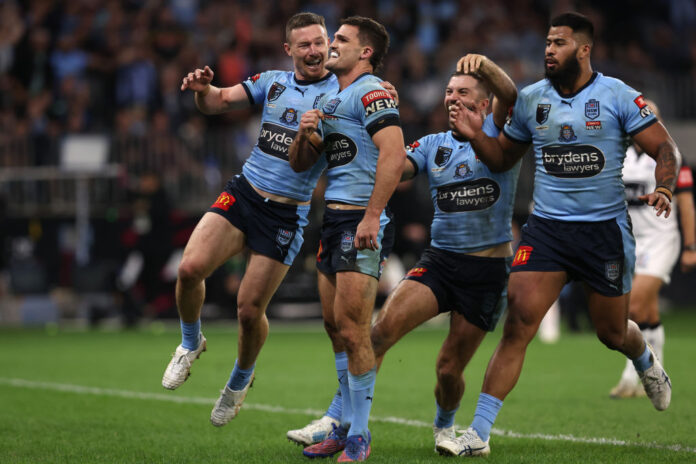 PERTH, AUSTRALIA – JUNE 26: Nathan Cleary of the Blues celebrates with teammates after scoring a try during game two of the State of Origin series between New South Wales Blues and QueenslandMaroons at Optus Stadium on June 26, 2022 in Perth, Australia. (Photo by Paul Kane/Getty Images)

While a loss in Perth would’ve handed the Blues a series defeat, it could’ve opened the doors for Hynes to debut in the third game, had it been a dead rubber. Despite Freddy being forced to overlook two players out of Latrell Mitchell, Stephen Crichton, Api Koroisau, Damien Cook, Jack Wighton and Matt Burton, you can bet neither of the overlooked duo will displace Hynes as 18th man, a role he played in last year’s dead rubber as well.

Despite the New South Wales squad being stacked with talent, it’s evident Hynes has his eyes on the Blues’ main two men.

“Watching the likes of Teddy and Nathan Cleary, especially being in my position; I pick up little traits of what they do. I definitely take it away, learn from that and try to implement those things into my game.”

While he is a certain starter against Canterbury this weekend, Nicho will likely be forced to miss Cronulla’s bye round clash with Melbourne next weekend, with all Origin players as well as their respective 18th men not allowed to take the field.

Brad Fittler will name his 22-man squad on Sunday night, with Hynes a near certainty to be selected in the reserves as the Blues look to retain the shield in front of a hostile Suncorp crowd.