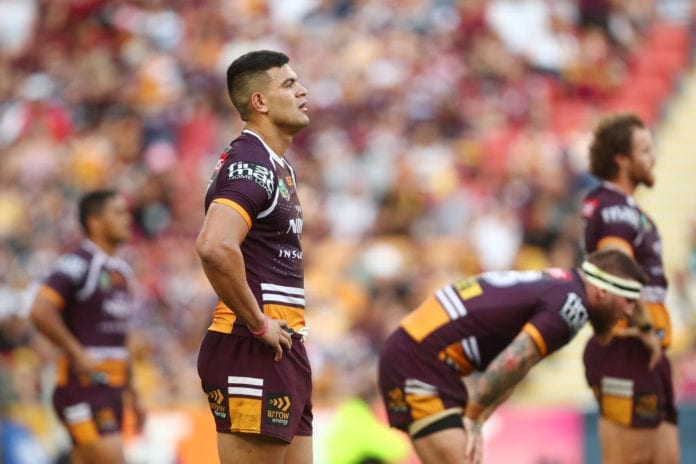 BRISBANE, AUSTRALIA – SEPTEMBER 09: David Fifita of the Broncos looks on during the NRL Elimination Final match between the Brisbane Broncos and the St George Illawarra Dragons at Suncorp Stadium on September 9, 2018 in Brisbane, Australia. (Photo by Chris Hyde/Getty Images)

Broncos young gun David Fifita is struggling to decided between a massive Titans offer and re-signing with Brisbane.

The Gold Coast Titans have reportedly offered a staggering $1.25 million a season deal to Fifita.

According to The Courier Mail, Titans head of football Mal Meninga increased the original offer of $1.1 million in a last ditch attempt to lure the emerging forward from Red Hill.

Fifita had informed the Broncos on Tuesday night that he was staying after backflipping on the Titans original deal.

On Wednesday, Fifita phoned the Titans to inform them of his decision, before Meninga stepped in with the massive deal that matches Daly Cherry-Evans for the richest contract in the league.

A five-year-deal has been put to Fifita’s management by the Titans, but a dispute with agent Steve Deacon has led to Fifita only wanting a 12-month contract before cutting ties with Deacon.

It leaves Fifita’s to chose between a $700k one-year-deal with the Broncos, before negotiating a new contract for 2020 and beyond, and the mega deal from the Titans.

A key factor in his decision is the ability to pay off a house for his mother Gwen, who is helping him with his contract discussions.

According to Brett Read, Fifita is changing his decision every day on which club to chose.

“I spoke to his mum Gwen, who is so influential in his life,” Read told NRL 360.

“Eben she said one day it’s the Titans, the next day it’s the Broncos, she said tomorrow it could be the Titan’s again. She said he is that undecided about it all.

“He is that emotional about it all and he is struggling with it all. She did say he will make a decision before he comes back next week. I would imagine we will have a firm decision in the next 24 to 48 hours.”