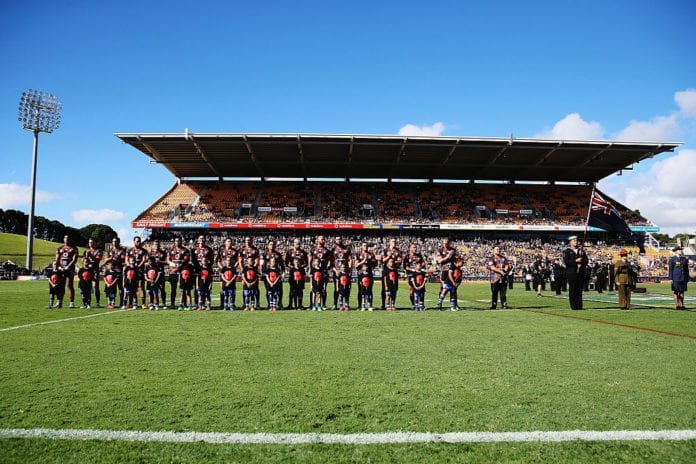 AUCKLAND, NEW ZEALAND – APRIL 25: The Warriors observe a moment of silence to mark the significance of Anzac Day prior to the round eight NRL match between the New Zealand Warriors and the Gold Coast Titans at Mt Smart Stadium on April 25, 2015 in Auckland, New Zealand. (Photo by Hannah Peters/Getty Images)

Warriors players have opened their pockets to help club staff keep their jobs in a bid to keep the club afloat in the midst of the coronavirus pandemic.

CEO Cameron George is aiming to save as many jobs at the Warriors as possible, and this selfless act by the players may just help him do so. The leadership group at the club made the decision Wednesday that they would donate their own money to help save jobs.

With leagues worldwide suspended because of the coronavirus, players are expected to take pay cuts as a result.

Players taking pay cuts from their club whilst donating money to the club to help its survival is something that is unseen and a true act of selflessness.

Warriors halfback Blake Green said the players opting to donate their own money back to the club shows the front office staff that they are all in this together.

“It’s tough times for everyone in society, not just the NRL and we’ve got so many fantastic people in our footy club,” Green told Stuff.

“Our football staff are like many other NRL clubs, they could potentially be on leave without pay for three months or longer if the game doesn’t return this year.

“We thought that as a playing group we could show our support. We’ve got a players’ fund that we put money into every month and that pays for us to go to a team lunch, or a team activity.

“We decided that we’d make a bigger contribution into that pool this month and offer that money to the club.

“There are plenty of staff at the club who have young families and like everyone else, they’re going to do it tough.

“The amount of money isn’t going to match what’s lost, but it’s more the message behind it, that we’re in this together. When your mates are hurting or need help, you help them out.”

Green said that even while in isolation, the leadership group and himself had discussions on what they could do to help support the club in any way they could.

“We saw at the beginning of the week that a few other clubs had made the decision to put their footy staff on leave without pay.” he said.

“I rang Roger (Tuivasa-Sheck), Tohu (Harris) and Adam (Blair) and suggested it.

“At the moment we face a lot of uncertainty as well and there’s a big chance that this month is our last pay as well until the game resumes.

“But while we’ve still got the chance to provide some assistance to our footy club, we need to show our staff that we care and support them.”

“When Blake contacted me yesterday and said the guys wanted to propose this, between Roger, Blake, Tohu and Adam, it just blew me away,” George said.

“To have the playing group put the club first in this difficult situation, it’s mind blowing.

“What they’ve been through over the last few weeks with their families, words can’t describe.

“I haven’t read of any other playing group in any other sport propose this.

“But what I said to Blake is that it’s amazing you want to do this, but if the players’ salaries take a cut, then we don’t expect players to continue to do this.

“While they are being paid in full, I’m happy for them to do what they’ve proposed for the club and the staff.

“But as soon as they take any cut, which is in the pipeline, the last thing they need to be doing is this, because they’ll be in the same position as everyone else.”

The actions by the leadership group to take it upon themselves to help the clubs survival speaks volumes about the job Stephen Kearney and Roger Tuivasa-Sheck are doing at the club and through their leadership, the club has developed a great culture.

“That has been a work in progress for a couple of years now,” George said.

“This is a clear example of our approach of making sure we have good people in the organisation, from players to administration.

“I couldn’t be prouder of our playing group, led by Roger and Stephen (Kearney) has been a big part of this as well.”

There are around 70 staff that have jobs at the Warriors, and the CEO is trying to save as many of them as he can to keep the club on its feet.

“We’re going through a process with our staff and the objective for us is to protect the club long term,” George said.

“In order for us to do that, we’ve got to work through a process where we can do the best we can for every staff member in the retention of jobs.

“To do that we’ve got to have some really challenging discussions and take some difficult positions in the short to mid term.

“I’m working through a process with staff that is confidential, but what the normal was, isn’t the new normal going forward sadly.

“We’ve heard that other rugby league clubs are laying off staff left, right and centre.

“But our owners and my objective is to retain everyone as best we can in some sort of capacity in the short to mid term, in order to have better protection for the club long term.”