Where is Melbourne? That’s in Redcliffe! Dolphins set to snatch another from Storm 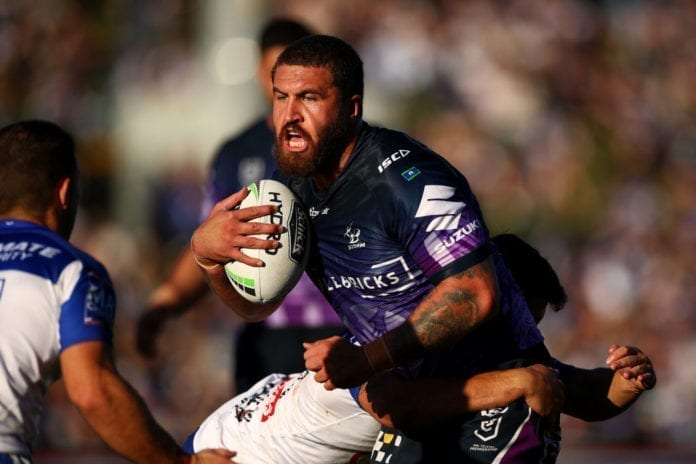 SYDNEY, AUSTRALIA – MAY 26: Kenny Bromwich of the Storm runs the ball during the round 11 NRL match between the Canterbury Bulldogs and the Melbourne Storm at Belmore Sports Ground on May 26, 2019 in Sydney, Australia. (Photo by Cameron Spencer/Getty Images)

The Melbourne Storm are set to lose yet another forward for 2023, with the Dolphins reportedly on the verge of signing Kenneath Bromwich.

The signing would follow that of Kiwi prop Jesse Bromwich last week and Queensland State of Origin star second-rower Felise Kaufusi who was the club’s inaugural signing.

It would also mean the Storm would be losing their entire second row and two important members of their middle third given Brandon Smith has also signed on the dotted line with the Sydney Roosters for 2023.

Fox Sports are reporting that Kenny Bromwich is set to follow his brother north on what is likely to be a similar length deal, in a move that may not come as that much of a surprise given the brothers have played their first-grade careers alongside each other. SYDNEY, AUSTRALIA – AUGUST 31: Jesse Bromwich of the Storm is tackled during the round 24 NRL match between the Manly Sea Eagles and the Melbourne Storm at Lottoland on August 31, 2019 in Sydney, Australia. (Photo by Cameron Spencer/Getty Images)

Kenny has a player option in his favour for 2023, meaning he is free to negotiate in the same way that any player can who is off-contract at the end of 2022.

He has played 192 first grade games for the Melbourne-based club since making his debut back in 2013, and has been consistently one of the strongest performers for the successful outfit under Craig Bellamy since he first played every game of a season in 2016. Since then, he has made no less than 21 appearances for the Storm, with every element of his game making him one of the best second-rowers in the competition.

The signing of Kenny Bromwich, who has turned 30, should it go through, would turn the Dolphins’ forward pack into a force, with Jesse Bromwich and Mark Nicholls the likely front-row combination, while Kenny would join Kaufusi in the second-row.

The club have also signed heavy-hitter Ray Stone from the Parramatta Eels for their inaugural season.