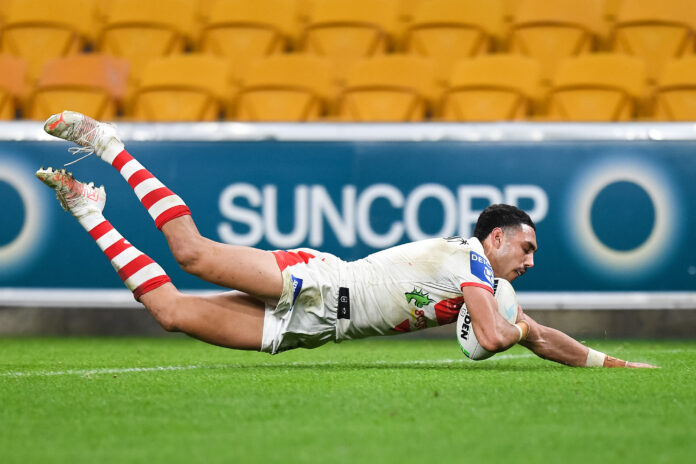 BRISBANE, AUSTRALIA – AUGUST 01: In this handout image provided by NRL Photos Tyrell Sloan of the Dragons scores a try during the round 20 NRL match between the St George Illawarra Dragons and the South Sydney Rabbitohs at Browne Park, on August 01, 2021, in Brisbane, Australia. (Photo by NRL Photos via Getty Images )

On a development contract, Sloan was a rare bright spot during a dismal final portion of the 2021 campaign, scoring six tries in five games and providing an attacking flare the Dragons hadn’t seen for much of the season.

The contract promotion also comes with an extension, with Sloan locked in at the club until the end of 2024.

The news follows the earlier three-year contract extension of young gun Jayden Sullivan, with the Dragons looking to lock down their future despite rumours swirling that other clubs were keen on the youngsters.

Sloan and Sullivan were part of the same SG Ball winning premiership side alongside Talatau Amone, who is on contract until the end of the 2023 season with the club. The Feagai brothers – Matt and Max – were also part of that side. 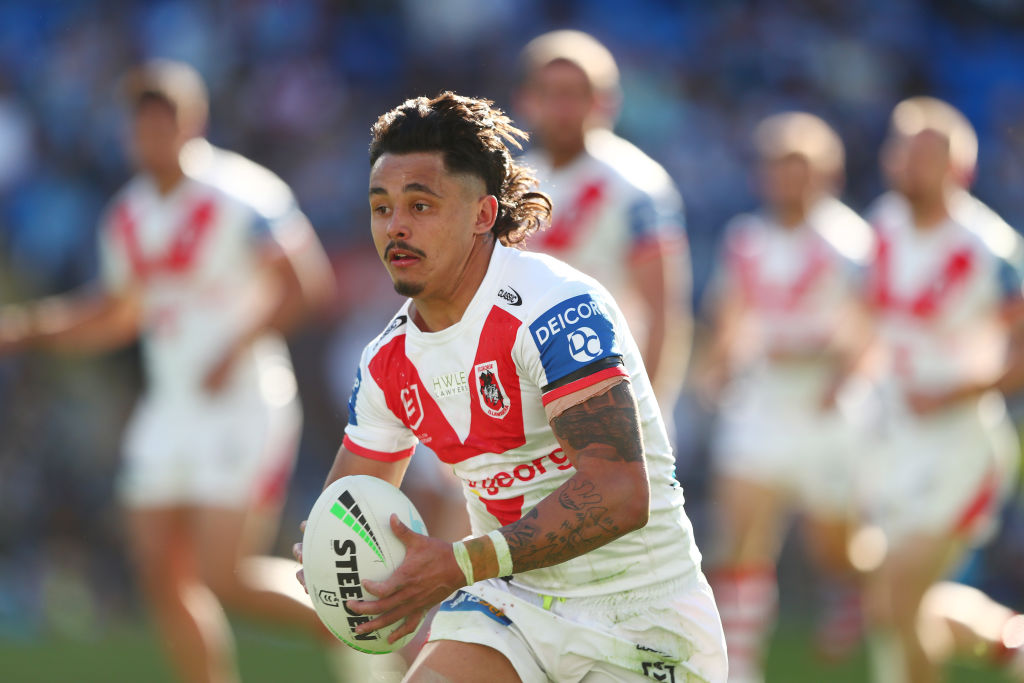 GOLD COAST, AUSTRALIA – JULY 25: Jayden Sullivan of the Dragons runs the ball during the round 19 NRL match between the St George Illawarra Dragons and the Gold Coast Titans at Cbus Super Stadium, on July 25, 2021, in Gold Coast, Australia. (Photo by Chris Hyde/Getty Images)

“Re-signing is a proud moment in my career. It’s good news for the club that there’s a few of us staying put and remaining with our friends and family. None of us wanted to leave. This is our home,” Sloan said.

“It’s exciting being in the first grade squad having come through the juniors together. It’s a cool moment for all of us. We’re all proud to wear the Red V jersey and we’re keen to take it back to where it needs to be, playing finals footy.

“I was put in the deep end last year, but it was an opportunity I was more than happy to take. My debut was the best moment of my life and to get four more games afterwards was very pleasing.

Following the departure of Matt Dufty, Sloan is likely to fight Cody Ramsey for the fullback spot in the Red V line-up for 2022, with the campaign to commence with a difficult assignment on the Sunshine Coast against the New Zealand Warriors, before they play the Penrith Panthers and Cronulla Sharks in back-to-back home games.